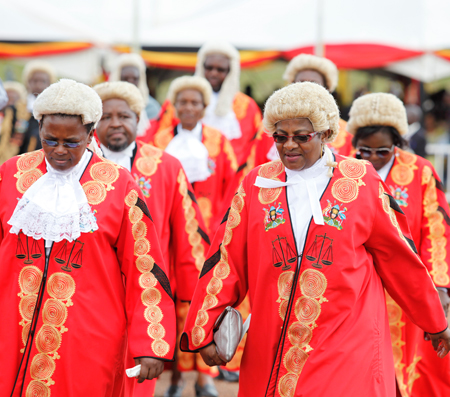 Judges under their umbrella body, Uganda Judicial Officers Association have voted to halt their impending sit down strike until February 12th so as to look into the new salary structure by government. The officers made the resolution during an Extraordinary General Meeting at the High Court in Kampala on Monday.

Speaking during the meeting, Principal Judge Yorokamu Bamwine said cabinet is working on harmonizing salaries of civil servants so the government needs time to effect the judicial officers’ pay rise.

In August this year, the Judicial Officers laid down their tools demanding for better working conditions and increased pay. After a series of negotiations with the government, they resolved to suspend the strike for three months.

Today, a majority of judicial officers resolved to extend the suspension of the strike after further negotiations with the government.

The deadline had to be settled through voting by show of hands. After the vote, 12th February 2018 was agreed upon

However, the officers warned that they will resume their industrial action if the government does not meet their conditions by the deadline.