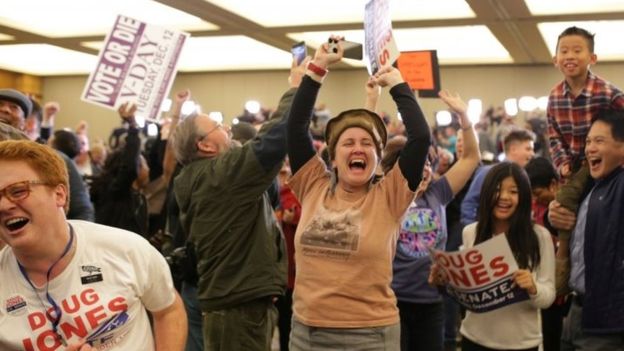 Supporters of Doug Jones celebrate at the election night party in Birmingham, Alabama

Doug Jones has become the first Democrat in 25 years to win a US Senate seat for Alabama, after a bitter campaign against Republican Roy Moore for the seat vacated by US Attorney General Jeff Sessions earlier this year.

His unexpected victory is a blow to President Donald Trump, who backed Mr. Moore, and narrows the Republican majority in the Senate to 51-49.

The Republican majority in the Senate will narrow, considerably improving the chances Democrats could gain control of the chamber in the 2018 mid-term elections.

It could also be seen as a rebuke of President Donald Trump, who gave full-throated support to Roy Moore even when other leaders in his party were hesitant.

After winning governor races in Virginia and New Jersey in November, some Democratic supporters will be hoping that an anti-Trump electoral wave is forming.

Although Mr Moore refused to concede, saying “it’s not over,” President Trump congratulated Mr Jones in a tweet shortly after US media declared him the winner, adding that “Republicans will have another shot at this seat in a very short period of time.”

Congratulations to Doug Jones on a hard fought victory. The write-in votes played a very big factor, but a win is a win. The people of Alabama are great, and the Republicans will have another shot at this seat in a very short period of time. It never ends!