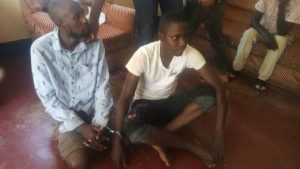 The suspects at Moroto Police station.

Police in Soroti on Tuesday intercepted a stolen vehicle and arrested two suspects in connection to the theft.

The suspects were identified as Byeruman Junior aged 28 years a Rwandan national, a resident of Moroto Town and Osiko Stephen 26, a former driver of the same vehicle.

The white kluger Reg.No UBB 613H belonging to a Chinese national Hyang xiuminig.was parked at Friend Hotel in Moroto from where it stolen.

Odong Michael, East Kyoga Regional Police Spokesman has confirmed the incident. “After stealing they drove the vehicle via Nakapirit district to Mbale, Soroti and turned to Lira” He said.

Odong adds that Police in Soroti got information and mounted a road block in Awuja Bridge where they were intercepted and arrested.
The vehicle and the suspects have been handed over to Moroto Police for further investigation.