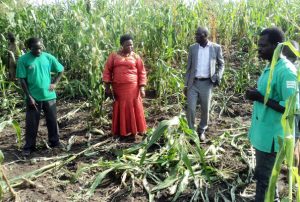 Residents in of the destroyed gardens

Leaders of Moyo district in West-Nile Region have appealed to Uganda wildlife to come in their rescue and prevent elephants that escape from Nimule boarder National Park to Uganda destroying their crops.

In a meeting of leaders at the District headquarters the area RDC Onyango Lawrence, reported the problem of elephants which come in big numbers and attack their crops at night to the minister of agriculture, animal industry and fisheries, Hon Vincent Bamulangaki Ssempijja

“It has now become a seasonal disaster in Difule sub-county which boarders Uganda to South Sudan. Elephant’s smells mangos during the season, and in the process they end-up destroying other crops like maize, potatoes and other food crops,” Onyango said

In reply to their call, the minister advised the farmers to put up electric fences, or plants that can prevent elephants from reaching the gardens. Ssempijja is in West-Nile Region for a consultative mission on how best the area can grow more food for its people.

Recently, residents of Nakaseke district through the chairperson of Kinyogoga sub-county, Mugisha Godfrey also reported to the minister about monkeys that have attacked their gardens, and requested government to come-up with a remedy for these animals to save their gardens from being attacked.