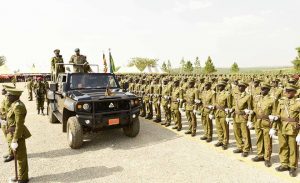 President Yoweri Kaguta Museveni the Commander In-Chief of the UPDF, on Friday morning Commissioned officer cadets at the Uganda Military Academy, Kabamba in Mubende. After 53 weeks of training, a total of 256 officers were passed out: 228 male, 28 females. There were 57 Somali fraternal officers while 21 provisional 2nd Lt Officers from the political commissar unit were also passed out.

PRESIDENTS REMARKS
Failure to undertake what a national army should entail has made many countries outsource security from the United Nations instead of sourcing security from within.

After years of analysis, we concluded that the army should have five principles: ideology and patriotism, skills of warfare, discipline, physical fitness and bravery.

The army is like a surgeon who uses a knife to cut the sick parts. If you cut anyhow, you are a butcher. Soldiers use violence that is purposeful, disciplined and limited to targets.

The UPDF has done good things even with limited resources. UPDF is an army of merit and patriots, not an army of job seekers. We are now a large group of officers with those characteristics. What we need now is really consolidation.

The government will continue to build the army: the Land Forces, Air Force and Marines. There is need for more work with the marine forces. A large part of the country is under water and the internal lakes too need security. The marine force will help guard fisheries.

I was reading the New Vision newspaper today and saw that fish has increased in the lakes. The fishers of immature fish had finished that resource in the lakes. I thank the marines for the good work done so far.

As the economy grows, the government will develop defence infrastructure such as dormitories and build and refurbish some of the army airbases.
Also efforts are ongoing to harmonise salaries for civil servants and once done, soldiers, teachers, and health workers will get better pay.
On infrastructure, the government will tarmac the Lusarila, Kasambya, Kyakasa, Nkongi, Makole, Lumejjele, Ssembabule Road, which is part of the oil roads.
I congratulate the Somali army for sending its soldiers here for training. I also congratulate the Somali soldier who was among the best performers. Somalis are very brave people, they should redirect their energies to building their country.