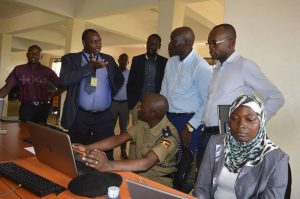 The scheme was established in 2014 by The Inspector General of Police Kale Kayihura in partnership with Microsoft Corporation with an objective to develop software solutions within Uganda Police Force and Uganda at large.

“The system was developed for the directorate of Crime Investigations (CID) to facilitate the process and track progress of case files to ensure ethics and integrity.” Ezra Mugyabwami the in charge ICT Department said.

According to Dr. Kitoogo Frederick Edward, Deputy Research and Development under National Information Technology Authority NITA, who had given a courtesy call at the ICT center, applauded the efforts done by Police and promised support whenever called upon.

Kitoogo said, NITA will help the center which is based at Naguru access internet to ease its work, negotiate on license renewal and funds which are among the greatest challenges the center faces.

system developed by the police center include; Duty- free information management under Welfare directorate, Certificate of Good Conduct under the Directorate of Interpol and International Relations to capture personnel bio data of those who require certification and Human Resource Management System, nominal roll, promotion and carrier development of personal.

The innovative systems will help police transform from paper work to E- system which will help the serve Ugandans better.