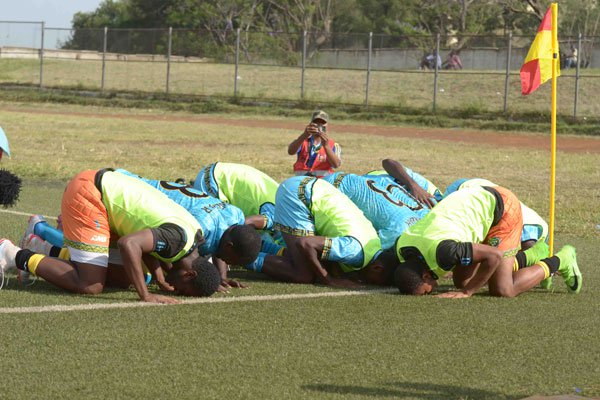 Zanzibar players celebrate their winner against Uganda during the Cecafa Senior Challenge Cup semi-final at Moi Stadium, Kisumu on December 15, 2017.

Hosts Kenya won the 2017 Cecafa Challenge Cup on Sunday, beating Zanzibar 3-2 on penalties after the final of the East and Central African Championship had ended 2-2 following extra time.

In an eventful match, Ovella Ochieng put Kenya ahead after just five minutes, and it stayed 1-0 to the hosts until the 89th minute when Zanzibar’s Kassim Khamis stunned the home side with an equaliser to take the final into extra time.

The triumph gives Kenya’s new Belgian coach Paul Put a winning start to his reign, having only taken charge of the team last month.

Zanzibar who ended Uganda’s Cecafa Challenge Cup reign with a 2-1 victory over the holders in the semi-final, again went behind when Masud Juma put Kenya 2-1 up after 98 minutes.

Zanzibar fought back for a second time, with Kassim Khamis scoring his second goal just two minutes later to make it 2-2 at the end of extra time.

Uganda took third place after a 2-1 win over Burundi.