President Yoweri Museveni has assured crime preventers in the country that they will maintain their duties as they are now regarded as a Reserve Army of the Uganda People’s Defence Forces (UPDF), State House Uganda reports.

“A few weeks ago, I saw in the papers and somebody said that the fate of the crime preventers is to be decided by the new Inspector General of Police. I called the IGP and told him that this will be handled” he said as he received cheers from the gathering.

The President made the remarks this afternoon while addressing a delegation of over 3,000 crime preventers’ co-ordinators from all regions of Uganda at Lugogo Indoor Stadium in Kampala.

Tumwine, Museveni, Blaise and Muzeei during the meeting

President Museveni disclosed to the attentive assembly that the strategy of the programme was that of the National Resistance Army (NRA), used during the people’s protracted liberation struggle. He added that Gen. Kale Kayihura/s role was to diligently implement the programme as he was a very loyal cadre and highly commended the former IGP for overseeing the programme to its fruition.

President Museveni further explained that during the bush days, NRA had layers of organisation that included, among others, militias who would guard villages. He, therefore, urged the administration of crime preventers to establish and consolidate village coordinators in order to effectively combat crime as crime is rampant in villages and perpetrators can easily be identified.

Mr. Museveni encouraged crime preventers to also be exemplary actors in poverty eradication in their areas to the level of becoming role model farmers. He advised the leadership of the Uganda Police to work jointly with Operation Wealth Creation to identify crime preventers per parish to be aided.

“Crime preventers should lead in the revolution of being crime preventers and wealth creators. You should work with OWC to single out those who can become model farmers so that they do not only get out of poverty but also become examples,” he counselled.

President Museveni informed the assembly of crime preventers the sectors of wealth creation that they should sensitize the youth about in their areas. The sectors include modern commercial agriculture with calculation, industry, services and Information Communication Technology (ICT) for Business Process Out-Sourcing.

The President expressed gratitude to learn that crime preventers have formed and decentralized their SACCOs, which he pledged to support come next financial year of 2018/2019. 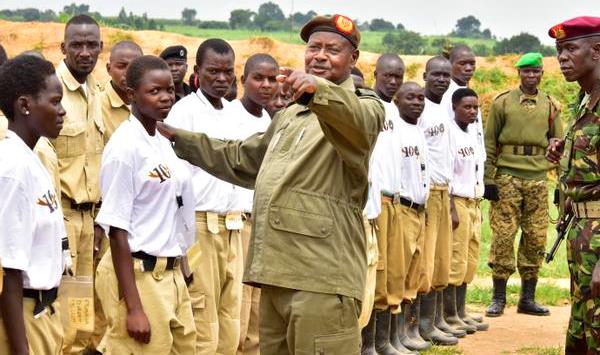 he President expressed gratitude to learn that crime preventers have formed and decentralized their SACCOs, which he pledged to support come next financial year of 2018/2019.

The Minister for Security, Gen. Elly Tumwine, advised crime preventers to be disciplined and organised so as to effectively combat crime and corruption in the country. He said the NRM revolution was founded and built along the same lines under the able leadership of President Museveni. He noted that a new generation has now emerged to continue with the struggle and will certainly deal with the vices of crime and corruption.

“The future belongs to the organised. Crime and corruption are like darkness; once torched, they will disappear and the 2 vices are in danger in Uganda,” he stressed.

The National Chairperson of Crime Preventers, Mr. Kamugisha Blaise, encouraged coordinators to continue with the noble cause of helping the Police to fight crime in order to make the country safe to live in.

The Deputy Inspector General of Police, Brig. Muzeyi Sabiiti, among others, attended the meeting.