The factory is now fully installed, pending technical testing, which will then lead to processing of fruits. 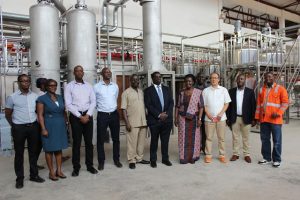 Amelia Kyambadde the Trade, Industry and Corporation minister (4th right) poses with some of the officials at the fruit factory

Dry tests at the Teso Fruit Factory in Soroti indicate it will finally be ready for launch before the end of this year.

Trade Minister Amelia Kyambadde, members of the Board of Uganda Development Corporation (UDC), Leaders of Teso Region, farmers and other stakeholders toured the factory on Wednesday 16th May 2018 and were shown the various facilities in place. Officials told the visiting team that dry tests have been done with wet tests with actual fruits to start in June.

After several delays, construction of the $12M about sh48bn Ugx factory has been completed with all machinery installed with official opening will be done  by President Yoweri Museveni in August 2018.

“After the trial test, commissioning of the factory will be done in August by President Museveni,” The Minister of  Trade, Industry and Cooperative Amelia Kyambadde, told a group of stakeholders including fruit farmers, district leaders and MPs from the Teso sub-region during the tour of the factory last week.

Kyambadde also said that as a ministry they have been restless over the issues regarding the fruit processing plant, pledging that she will not rest until the factory begins commercial production, which she said will happen in slightly over three months.
According to UDC, government’s investment arm, the factory is now fully installed, pending technical testing, which will then lead to processing of fruits.
The construction of the factory began in April 2015 and was scheduled to have been completed in 2016.
And now government says testing the “facility and all that will take about three months from May.”

Ronald Kigongo Akakwanswa, the Soroti Fruit Factory manager production and technical services, said all arrangements have been made including organising farmers to supply the fruits.
The fruit processing plant is an initiative of the government, with assistance of the Korea International Cooperation Agency (KOICA), working in partnership with the Teso Tropical Fruit Growers Cooperative Union(TTFGCU).

Way back in 2012, the Korean Government through their development arm; Korean International Cooperation Agency (KOICA) offered to provide a turnkey project for Soroti Fruit Factory