Leader of Opposition in Parliament, Winnie Kiiza calls for the overhaul of parliamentary police 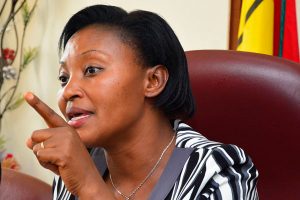 The Leader of Opposition in Parliament,Winfred Kiiza, has demanded for a total overhaul of  parliamentary police security which she describes as ‘full of disrespecting officers.’

The opposition leader’s cry for change of police officers at parliament came after one of her staff at parliament was arrested under unclear circumstance and taken to CPS without making a statement and stayed in a police cell for a night.

She reported that when she contacted the head of parliament police, Anabera Nyinamahoro, to understand the gravity of the matter in which her staff, Sylvia Bugembe was arrested, she was not listened to.

Sylvia Bugembe was arrested on suspicion of involving herself in conning   the member of parliament  for Bagangaizi East  Onesmus Tunamasiko  of 100,000 shillings.

Kiiza noted that the current Superintendent of Police, Anabera Nyinamahoro, heading the divisional commander for parliamentary police is rude and arrogant and she (Nyinamahor) does not want to listen to Members of Parliament issues.

She said that SP  Anabera Nyinamahoro is heading  police officers at parliament who are at a level of police commissioners  and even others holding   higher ranks   in police than what she holding.

She said that the Minister of Internal Affairs should explain the criteria used for deployment of police officers at parliament.

She said that police force should consider the ranking while carrying out deployments to avoid junior ranking officers heading the officers with higher ranks.

She said that at any time anybody can be picked from parliament without anybody’s knowledge since the parliament police boss does not want to listen to any member of parliament and the heads of parliament.