Opondo has already expressed the desire to grab the opportunity with open hands, as he attested to the FUFA media team. 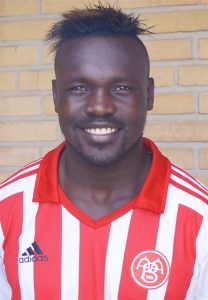 The Cranes international player, a right winger who turns out for Danish Superliga club Vendsyssel FF, could win his maiden cap.

Opondo has already expressed the desire to grab the opportunity with open hands, as he attested to the FUFA media team.

“I am looking forward to my debut when I put on the Uganda colors. However I still need to prove my worth for this selection,” he said

Before joining the Uganda Cranes team in Niger, Opondo was part of the Vendsyssel FF team that won 3-1 away to Thisted FC at the Sparekassen Thy Arena, in a game where he was also cautioned in the ninth minute.

It is reported that Sebastien Desabre the head coach of the Uganda Cranes has a good platform to continue monitoring players he had not seen in action for the national team.

The players include midfielders Aucho Khalid and Faruku Miya, as well as Austrian-based striker Edrisa Lubega, as the trio missed the previous two build-ups in Kampala against Sao Tome and Principe as well as Malawi.

Meanwhile, the friendly matches in Niger will help Desabre to frame the team that will take part in the 2019 AFCON qualifiers come September 2018.