Serena Williams left it late to pull out of her match against Maria Sharapova. There was lots of excitement about the French Open match but injury ended it

Serena Williams may have styled herself as a superhero in her now famous catsuit, but it could not protect her from the advancing years and a shortage of matches coming into the French Open. Her 36-year-old body protested at the strain being placed upon it, and the result was a hugely deflating withdrawal from her breathlessly-awaited fourth-round match against Maria Sharapova. 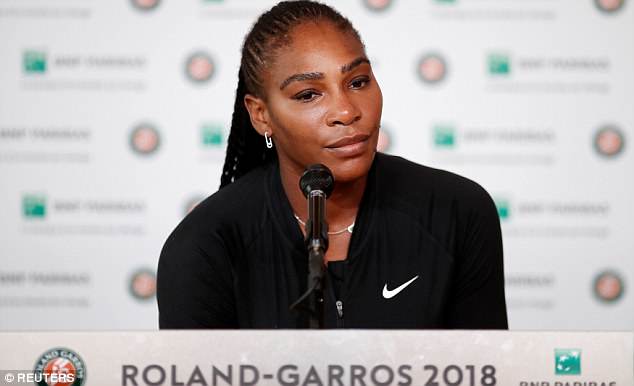 Instead of walking out on to the Court Philippe Chatrier she was heading to a hospital for an MRI scan, which should go some way to determining how ready she will be to mount a serious campaign in four weeks’ time for an eighth Wimbledon title.  Her desperation to return to SW19 was clear as she announced that she was scratching. Losing to Sharapova would have been unthinkable, and she did not want to enter the arena handicapped for the task.

‘Unfortunately I have been having some issues with my pectoral (upper chest) muscle, and it has unfortunately been getting worse to the point where right now I can’t actually serve,’ she said. ‘It’s kind of hard to play when I can’t physically serve.’ The return of Williams after the birth of her daughter has been a great fillip for the game, so everyone will wish to see her at Wimbledon, and maybe a warm-up event beforehand.

Yet Kim Clijsters, who won three Grand Slam titles after giving birth at the age of 24, warned of the physical demands that the great American is facing. ‘Pregnancy and birth is very physically demanding and you deal with new injuries that you are not used to,’ she said in her role as analyst for Eurosport’s Roland Garros coverage. ‘In the first part of my career I’d have recurring injuries and then after I had Jada I had new injuries.

‘I started having some back issues that I hadn’t done previously, so you have to get used to it and the way your body reacts. I needed 9-10 months before I was ready. I think Serena can get close to winning another Grand Slam. It’s in these new situations that she’ll go home and learn a lot about how she is feeling.’ 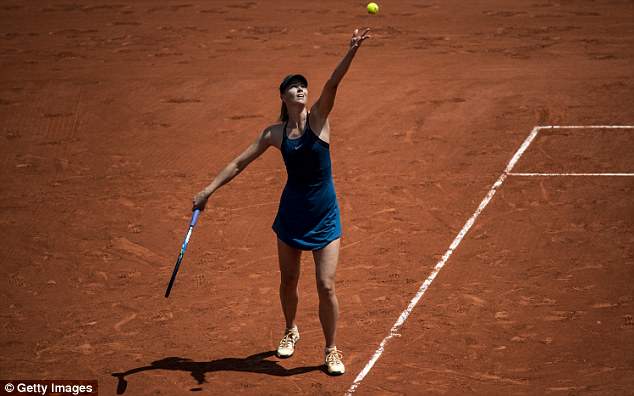 Williams was keen to dispel any idea that she was running scared from Monday’s grudge match. ‘It’s very difficult, because I love playing Maria,’ she said. ‘It’s a match I always get up for, her game matches so well against mine. I’m beyond disappointed.

‘I gave up so much, from time with my daughter to time with my family. I put everything on the court, all for this moment.’ She denied that playing three sets in the doubles on Sunday had been a mistake, saying that she needed to test the shoulder and how it was strapped. The early intention, at least, is to play the rest of the summer on grass and hard courts. ‘I’m coming up to surfaces that are my absolute favourite to play on and that I do best on,’ she said. ‘Hopefully I can continue to heal and be able to play those events.’

The suspicion has always been that this outing on to the clay was with a more medium-term goal in mind, that of clinching a 24th Grand Slam title in London, and her coach, Patrick Mouratoglou, hinted strongly at that. He stated that she would get scanned ‘so she has the best chances to play Wimbledon and hopefully win it, because that is why she came back’. 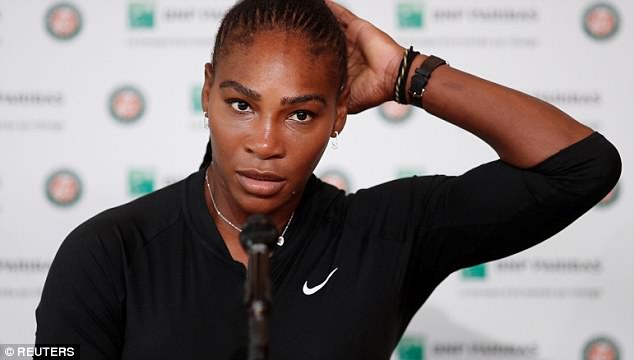 He also told America’s Tennis Channel he believes that having a family will help her cope with the disappointment: ‘If it had been one year and a half ago she would have been destroyed completely. She is not destroyed, she is sad but she is also happy because she feels she plays great tennis, she feels she is this close to being completely ready, so she is looking forward to what’s coming next already.’

Sharapova, now through to the quarter-finals at an event she has won twice, will face Garbine Muguruza next. Muguruza enjoyed almost as easy a progress when her opponent, Ukrainian outsider Lesia Tsurenko, retired after two games.

It turned out that the match of the day was provided by 5ft 7in Diego Schwartzman of Argentina, who came back to defeat 6ft 8in South African Kevin Anderson 1-6, 2-6, 7-5, 7-6, 6-2. In the quarter-finals he will meet Rafael Nadal, who notched his 37th consecutive set at Roland Garros in beating German Maximilian Marterer 6-3, 6-2, 7-6.