Ronald Sebuguzi and Leon Ssenyange finally overcame their evil eye in Fort Portal with a glorious victory on Sunday.

The crew’s ambitions to finish the event received a major boost after topping day one with the fastest time.

Sebuguzi overcame the tight battle on the final day by maintaining his day one lead throughout to claim his maiden Fort Portal rally win.

“It has been a good rally. At least we can put our Fort portal trouble behind us. We are really happy for the win,” said Sebuguzi.

The victory elevates Sebuguzi to fifth position in the championship standings with 150 points in four events. He is 50 points behind NRC leader Jas Mangat.

Sebuguzi and Ssenyange are now back in the fight for this year’s title. 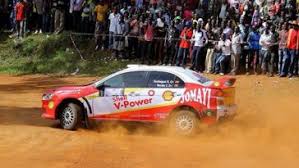 “The points difference is not as big as it was before. There are three more rounds to go which makes the competition even tighter, but we are ready to go for it again,” he added.

Walubi kept in the mix of the top positions turning his day one fifth position to a second position overall. That was his second podium this year after Jinja rally. Walubi is now third on the NRC leaderboard with 180 points.

Susan Muwonge was yet again on top of her game. She barely put the foot wrong claiming another convincing finish. She sealed the podium dash in third position.

Her consistency puts her in fourth position on NRC with 170 points. Fred Wampamba finished fourth.

Omar Mayanja and Hussein Mukuye will feel undone by a final stage roll just when everything seemed to be going right.

Mayanja, who was 25 seconds behind Sebuguzi into the last two stages, lost the fight when he rolled in the final stage.

Luckily, the crew managed to get back on a road and finish fifth overall; their best finish this year so far. Unisan Bakunda settled for sixth overall to maintain his second position on the NRC with 194 points; six points behind Jas Mangat.

Also Read: Neymar nets superb solo goal on his return from injury and Roberto Firmino fires the second in a 2-0 win against Croatia

Despite undergoing a series of punctures, Adam Rauf claimed his first finish this year after coming seventh overall.

Edwin Kalule topped the 2WD to extend his lead in the category championship.

The most notable causality was Yusuf Bukenya and Frank Serugo whose car caught fire in the early stage on Sunday.

The crew was quick to escape the fire, suffering minor injuries. However, the Evo 9 could not survive the fire. Duncan Mubiru, Ponsiano Lwakataka, Hassan Alwi among others were the causality of the event.

The next NRC round is the Pearl of Africa Rally scheduled for July 20-22.