Panama promised passion and fighting spirit and we now know what they meant as two goals from Romelu Lukaku helped to settle a bruising and often frustrating encounter in Belgium's favour.

Panama promised passion and fighting spirit and we now know what they meant as two goals from Romelu Lukaku helped to settle a bruising and often frustrating encounter in Belgium‘s favour.

Lukaku struck twice after Dries Mertens cracked the deadlock with a wonderful dipping volley. Three splendid goals, all in the second half, but this was a tie littered with stoppages, insignificant fouls and eight yellow cards. Five were shown to Panama, the most for any one team in a World Cup game since Holland in the 2010 final. 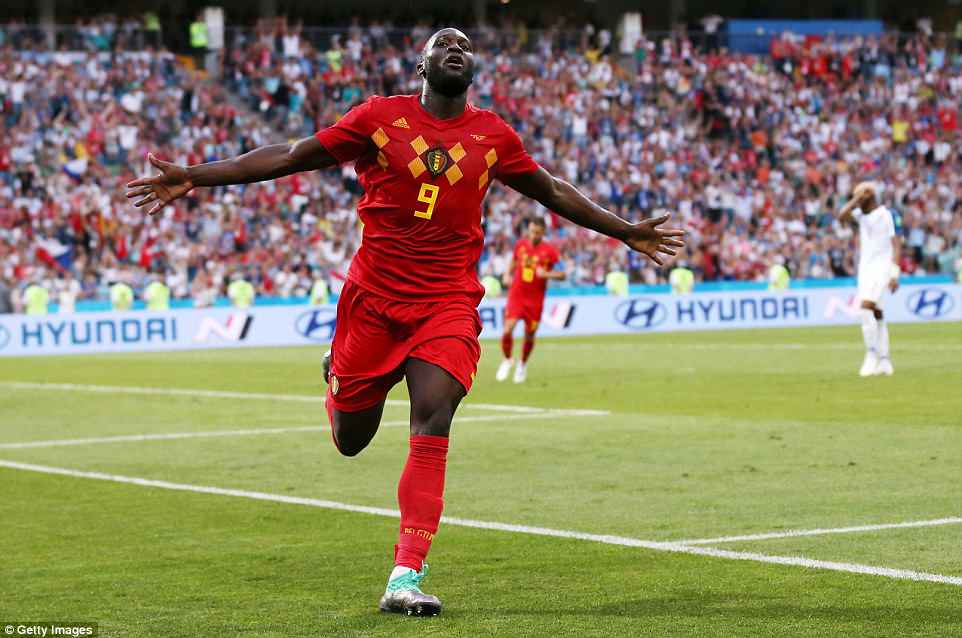 Romelu Lukaku got Belgium off to a roaring start at the World Cup, scoring twice in their 3-0 win over Panama

Roberto Martinez feared for the safety of captain Eden Hazard who limped out of the Fisht Stadium in Sochi with a heavy strapping on his left calf. 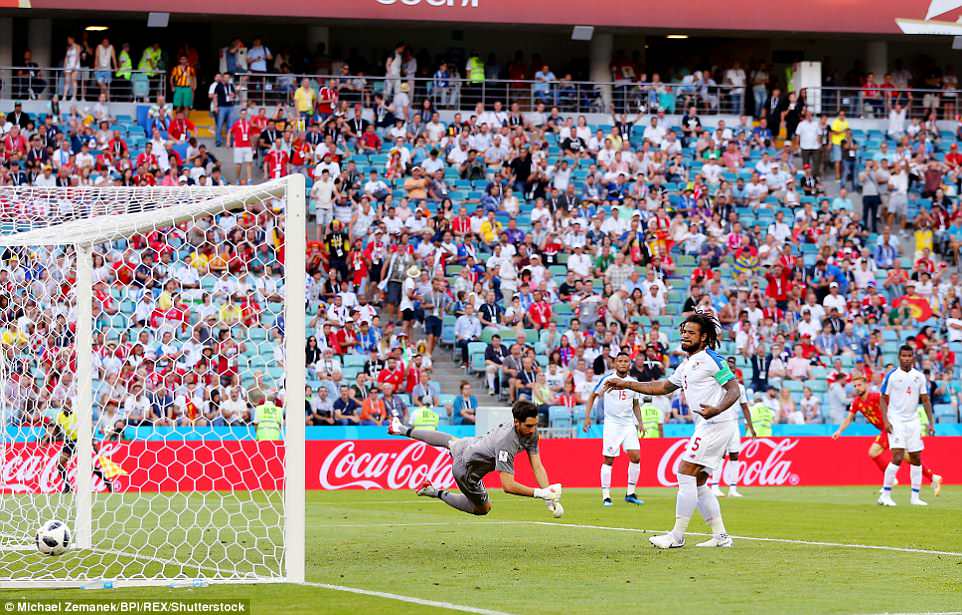 The ball by Dries Mertens sent flying across the face of goal and Jaime Penedo, the Panama goalkeeper, could do nothing to stop it

‘You could see the yellow cards were mounting,’ said Belgium manager Martinez. ‘It is a worry that in any of those tackles he could get hurt. ‘It’s one way of trying to stop him, and everyone is allowed to prepare games in the way you can. That’s part of the rules but you run the risk of players sent off. 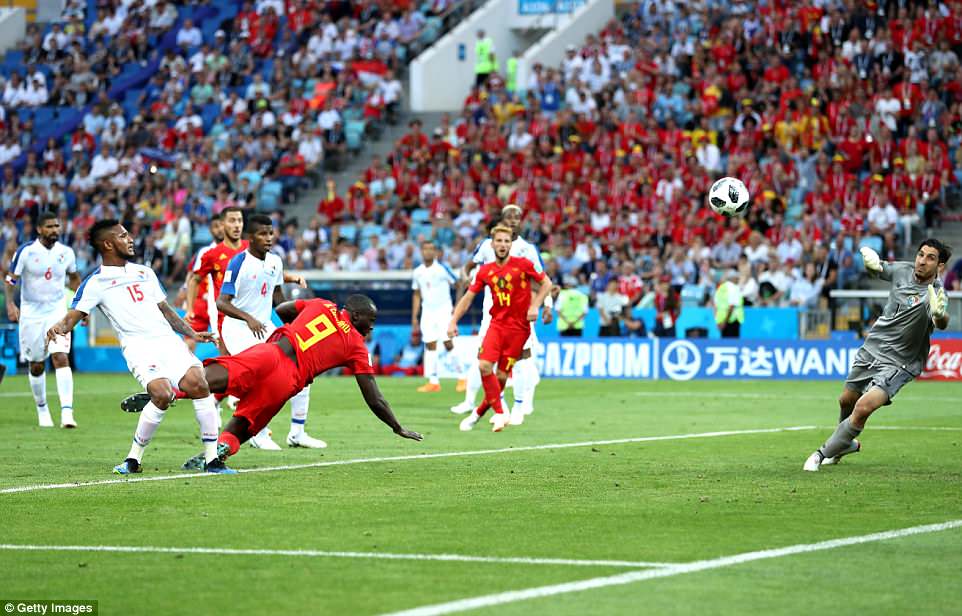 Lukaku then got his name on the scoresheet, latching on to Kevin De Bruyne’s ball with a fine diving header to double the lead

‘My worry is that we lose the opportunity to enjoy quality of a player like Eden. Not just for Eden. Any player with the ability to take players on. We hope we get lucky in that respect.’ Kevin de Bruyne’s patience snapped late on as he committed the worst tackle of the game, planting his studs into the midriff of substitute Luis Tejada and could have seen red rather than yellow. 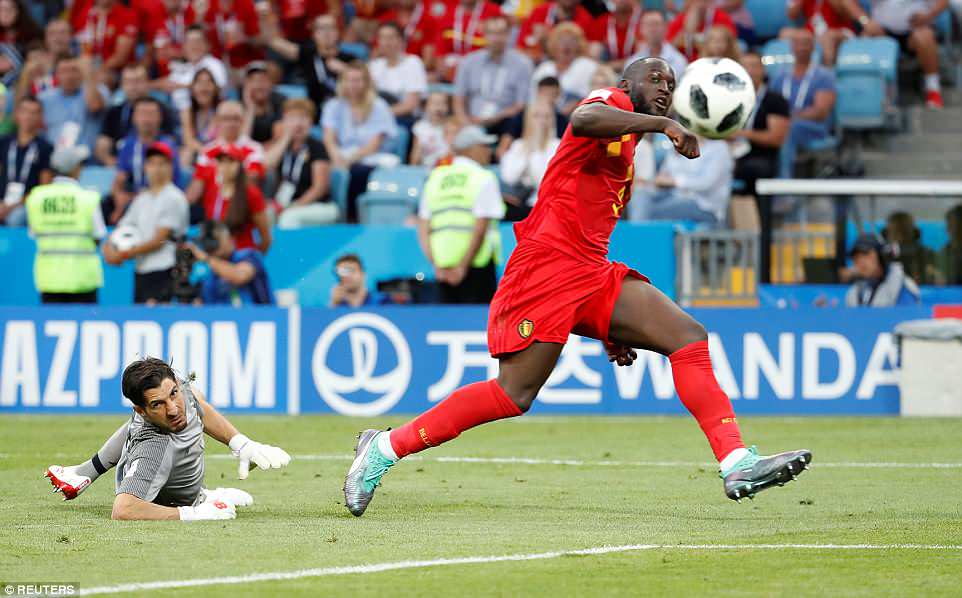 Then just six minutes later, the Manchester United marksman found himself clean through before dinking over to make it 3-0

‘Sometimes we look tough,’ said Panama boss Hernan Gomez. ‘But I saw Belgium players going in very hard as well. We never have any intention to be tough. We try not to hurt anybody. We don’t have bad intentions.’

Gareth Southgate will take note. His Panama paper will be a very different sort of test. Belgium passed it, but they required clear minds before the quality won through. Five thousand Panama supporters made the journey to Russia to witness their World Cup debut, neutral support swung their way and the volume went up as they frustrated their illustrious opponents. 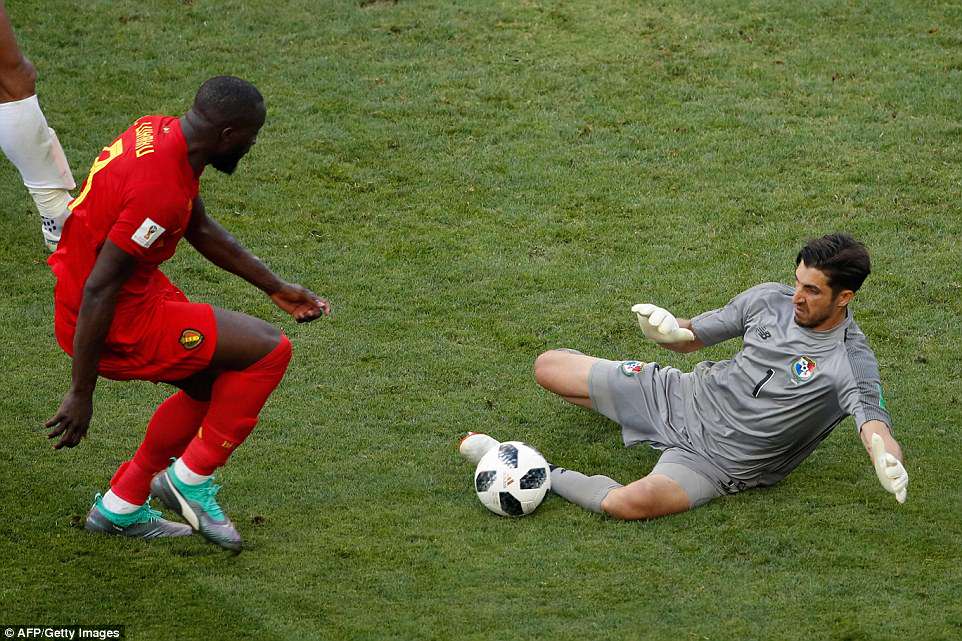 Belgium, with De Bruyne deployed deeper than for Manchester City was unable to drive the tempo higher in the first half. Martinez stopped short of complaining about the pitch but he mentioned the length of the grass for the second time in three days. He thinks it is too long and deterring slick passing.

Panama fell down injured with little encouragement, demanded treatment and took their time on restarts while disrupting the rhythm with a succession of free-kicks. Belgium, for their part, wasted chances and Roman Torres produced remarkable if slightly fortuitous clearance to stop Lukaku tapping in a cross from De Bruyne.

Panama grew in confidence as half-time approached but any momentum ground to a halt after the interval. Roman Torres and Fidel Escobar failed to clear a cross and when the ball dropped to Mertens on the right, the Napoli winger finally beat ‘keeper Jaime Penedo with a volley which looped inside the far post.