Cristiano Ronaldo chants ‘Juve, Juve’ as £100m man is greeted by hundreds of excited fans as he undergoes medical at the Allianz Stadium

Hundreds of excited Juventus supporters greeted Cristiano Ronaldo as he arrived at the club's medical centre to complete his £100million move from Real Madrid.

Hundreds of excited Juventus supporters greeted Cristiano Ronaldo as he arrived at the club’s medical centre to complete his £100million move from Real Madrid. 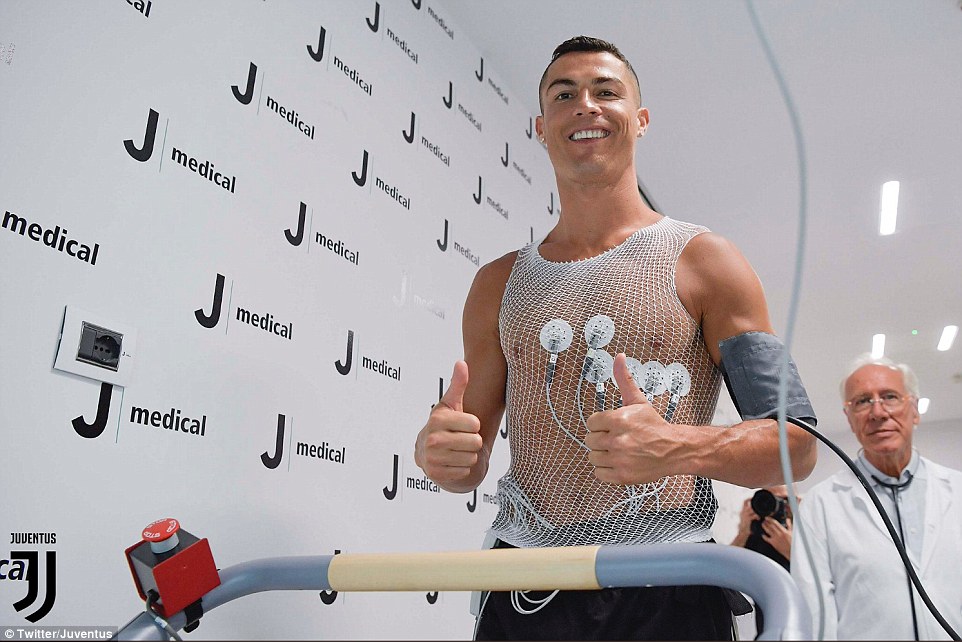 Cristiano Ronaldo smiles as he runs on the treadmill during his Juventus medical on Monday morning, as the Portuguese prepares to complete his £100million move from Real Madrid

The Portuguese touched down in Turin in a private jet on Sunday evening and arrived at the J Medical Centre adjacent to the club’s Allianz Stadium for tests on Monday morning. 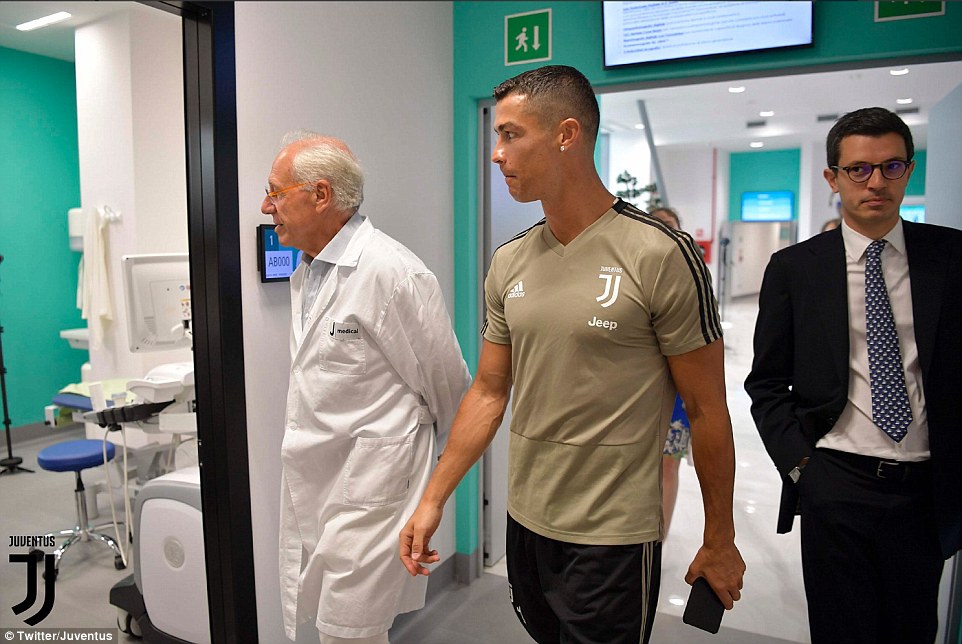 The Portuguese star arrived at the J Medical Centre, adjacent to the Juventus stadium, for his assessments on Monday

He signed autographs for some of the waiting crowd, who chanted his name and cheered. As Ronaldo walked back into the medical centre, he sung ‘Juve, Juve’. 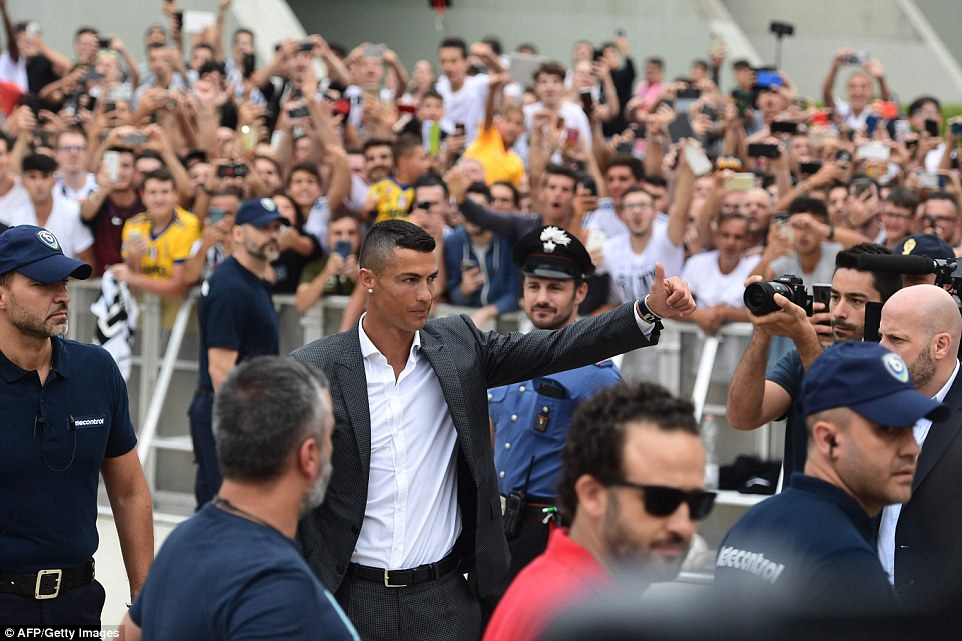 Assuming the 33-year-old passes his medical, Ronaldo will be officially unveiled as a Juventus player inside the stadium at 5.30pm UK time. 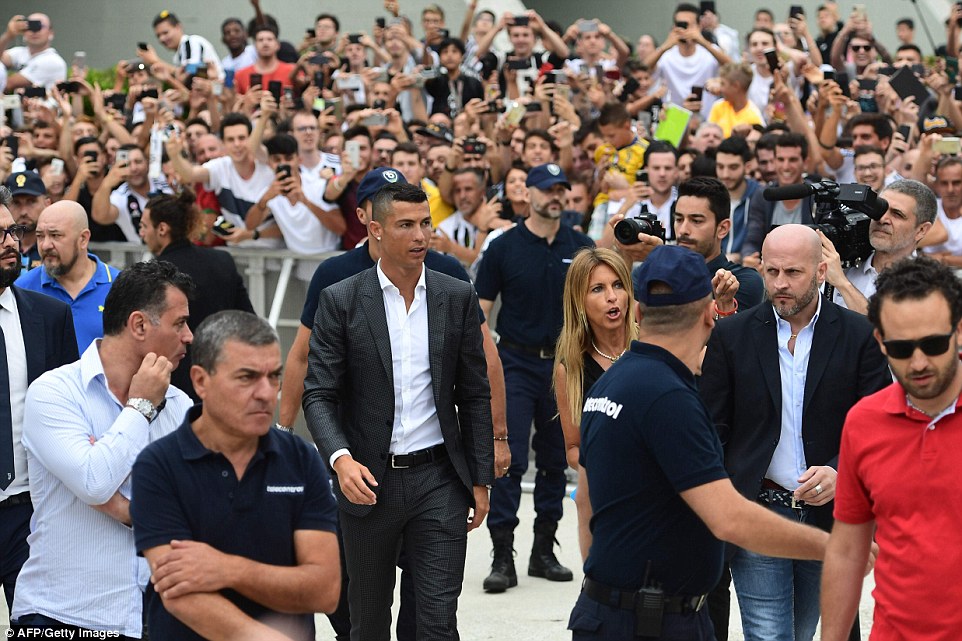 In the meantime, Ronaldo is due to meet Juventus manager Massimiliano Allegri and his new team-mates having formally completed his transfer from Real Madrid. 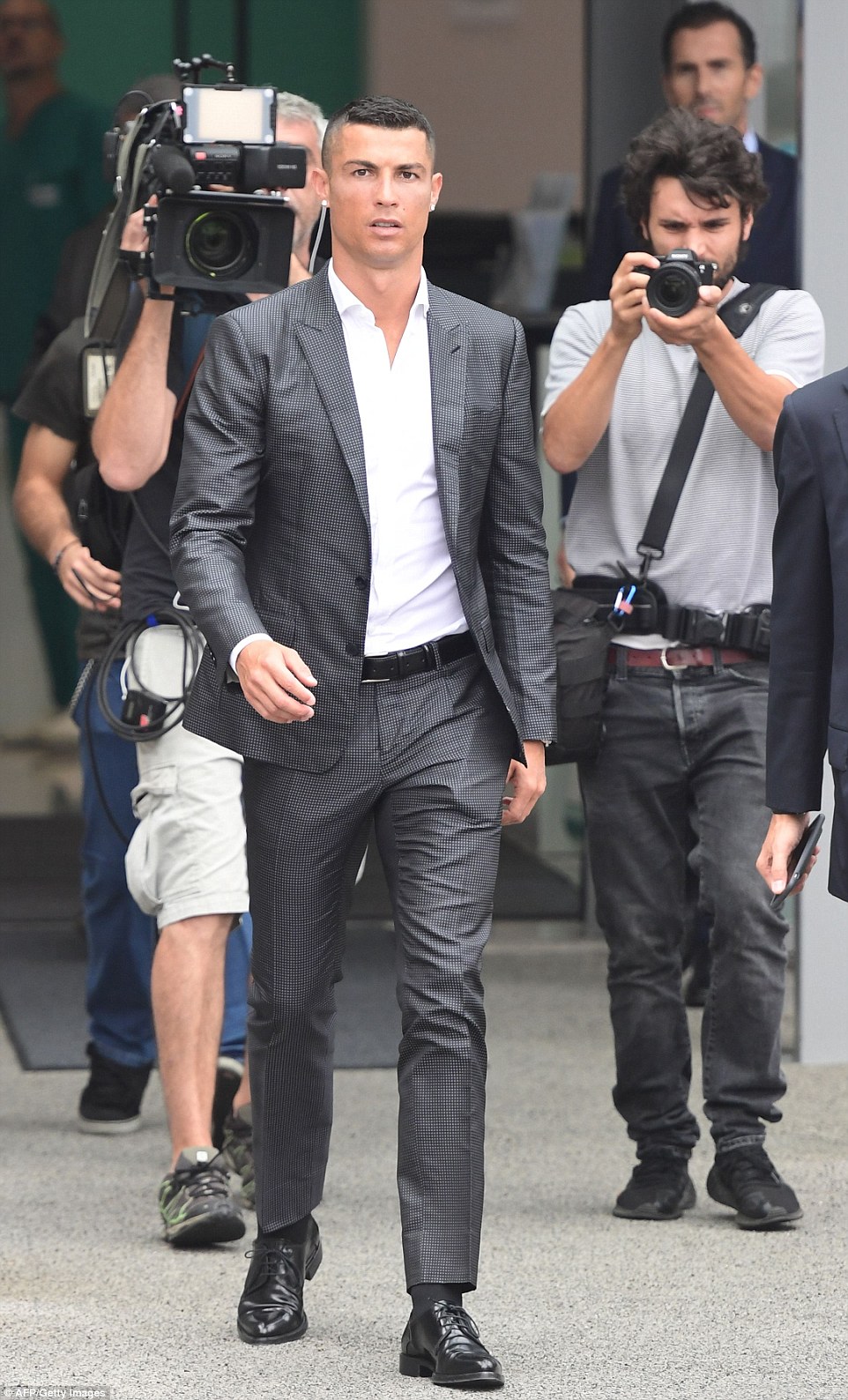 Ronaldo looked the part in a check suit, crisp white shirt and smart shoes as he arrived to complete his move to Juventus

Juventus fans gathered outside the medical centre from early in the morning to catch a glimpse of their new hero, with some waving scarves and banners. 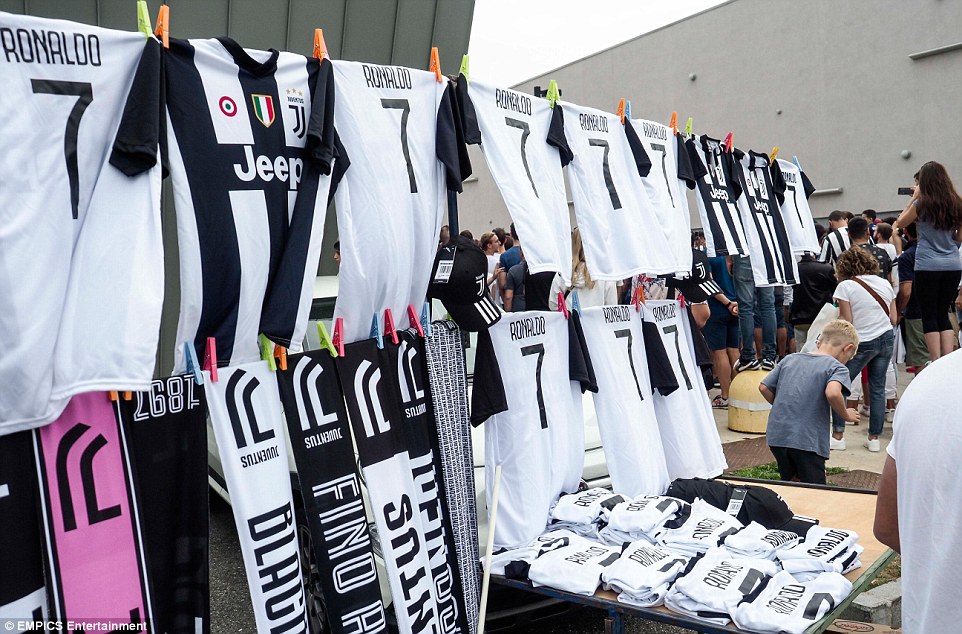 Some had already been to the club shop to purchase a ‘Ronaldo 7’ shirt, while a scrum of journalists and cameramen also awaited his arrival. 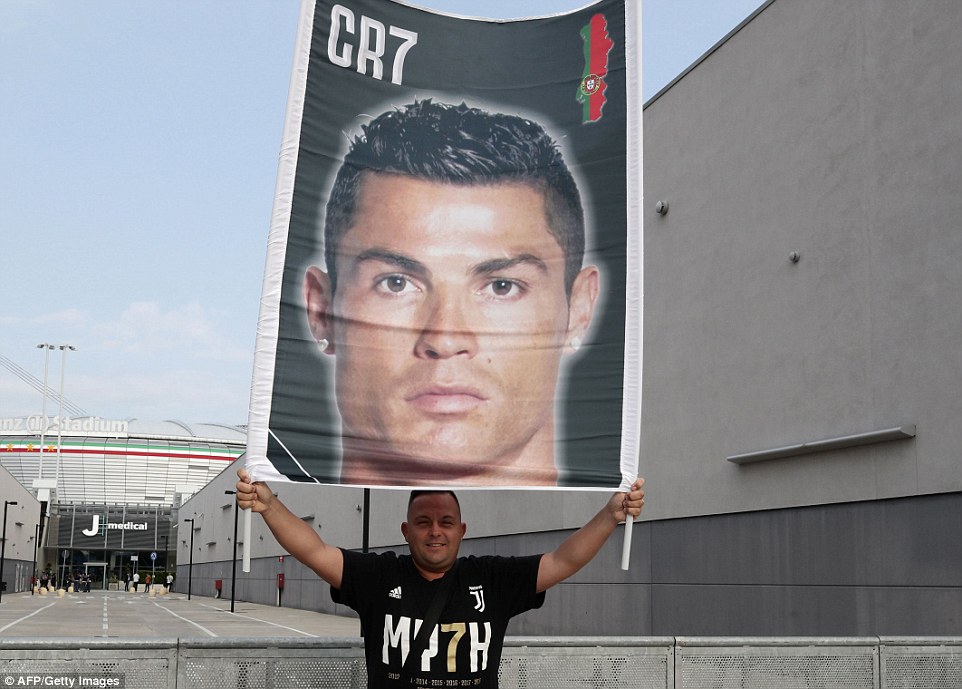 Ronaldo and his family travelled from Greece, where they had been enjoying a post-World Cup holiday, by private jet on Sunday, landing at Turin’s Caselle Airport before being whisked away by car. 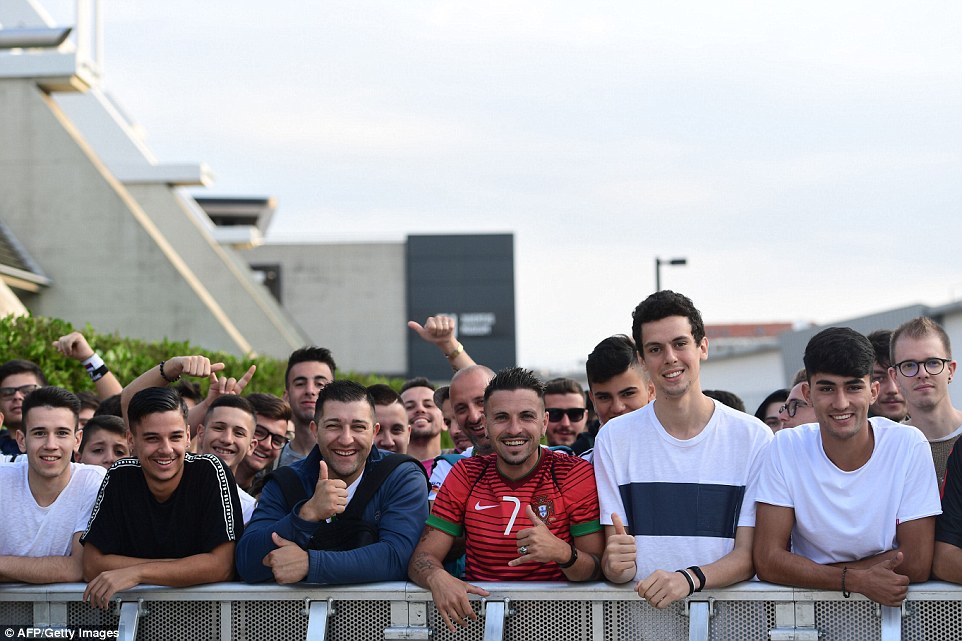 The Serie A champions have labelled Monday #CR7DAY on their social media accounts as a new chapter begins in Ronaldo’s career. 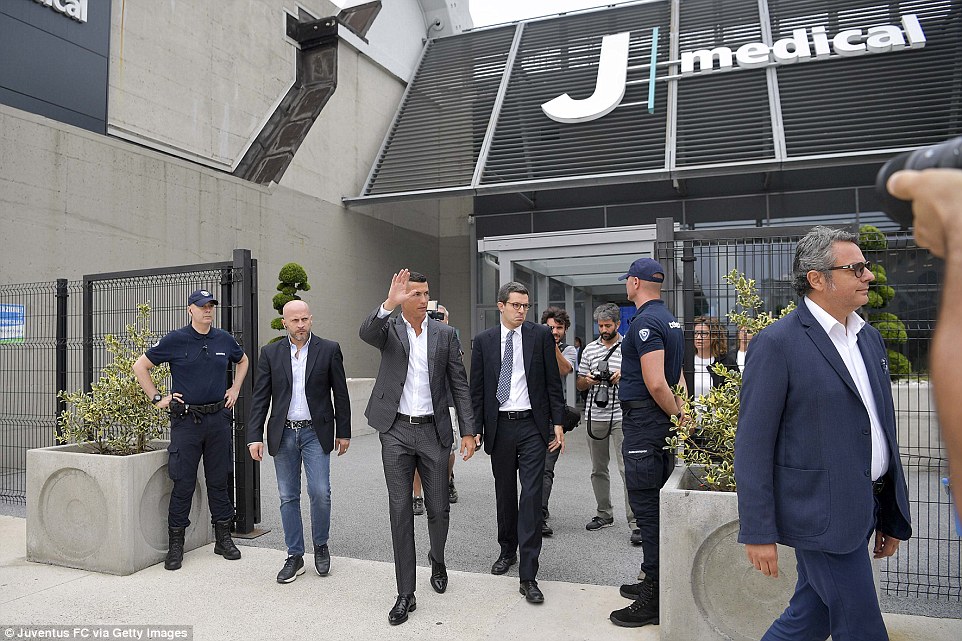 He decided to end his nine-year stay at Real Madrid, a period in which he won the Champions League four times and the Ballon d’Or five times.