At least 74 people have died in wildfires in the Attica region around Athens, in Greece's worst fire disaster in more than a decade. Flames fanned by strong winds devastated the seaside village of Mati, devouring homes and cars.

Desperate families trying to reach the safety of the sea were trapped by walls of smoke and flame. Others died in buildings or cars. 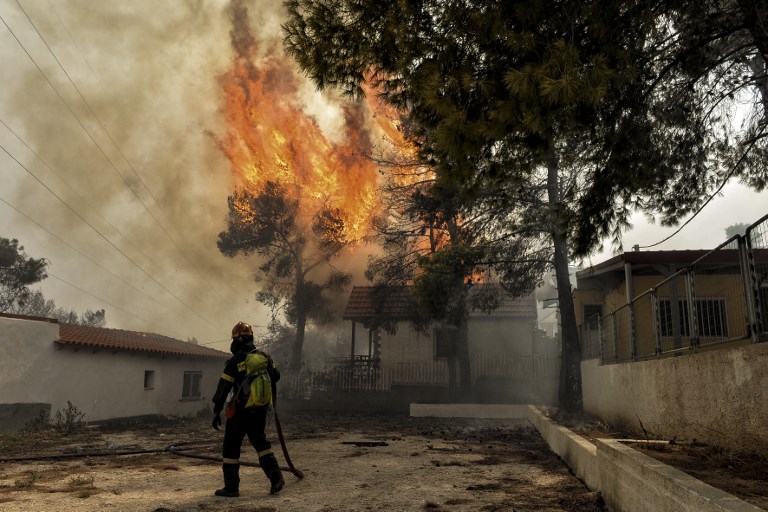 A firefighter tries to extinguish hotspots during a wildfire in Kineta, near Athens, Greece

After the 26 bodies were found in an open space, Nikos Economopoulos, head of Greece’s Red Cross, said: “They had tried to find an escape route but unfortunately these people and their kids didn’t make it in time. Instinctively, seeing the end nearing, they embraced.”

Dimitri Piros, director of medical services for Ekav, Greece’s nationwide ambulance service, told the BBC people had suffered horrific injuries because of the speed of the fire. The blaze struck like a flamethrower, he said, causing both smoke inhalation and skin burns.

Coastal patrol boats and private vessels picked up hundreds of those who did manage to reach harbours or beaches.

“Thankfully the sea was there and we went into the sea, because the flames were chasing us all the way to the water,” said one survivor, Kostas Laganos. People watch a wildfire in the town of Rafina, near Athens

“It burned our backs and we dived into the water… I said: ‘My God, we must run to save ourselves.'”

George Vokas, whose family escaped by sea but whose house and cars were burnt, told BBC News that two women he had tried to help had died.

“We’re talking about a biblical catastrophe in this wonderful area of Mati,” he said.