A book of condolence will be opened at the stadium from Tuesday and the team has postponed its upcoming League Cup fixture against Southampton.

Leicester City’s  boss, Vichai Srivaddhanaprabha, was among the five people who died when his helicopter crashed and went ablaze.

The incident happened on Saturday near the Premier League side’s stadium car park, a few minutes after the club’s draw with West Ham.

Fans and mourners have already stormed the area to pay tribute to the chairman whom most described as a great man.

The club has also expressed their loss at Vichai’s death.

“The world has lost a great man,

“Leicester City was a family under his leadership. It is as a family that we will grieve his passing and maintain the pursuit of a vision for the club that is now his legacy,” the club said in a statement.

A book of condolence will be opened at the stadium from Tuesday and the team has postponed its upcoming League Cup fixture against Southampton. 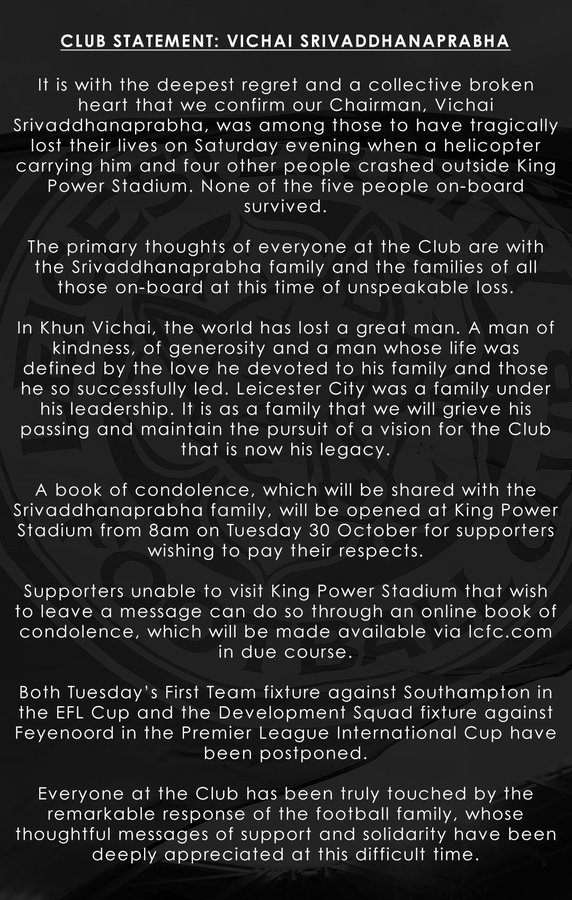 “Everyone at the Club has been truly touched by the remarkable response of the football family, whose thoughtful messages of support and solidarity have been deeply appreciated at this difficult time,” the statement said.

Leicester striker Jamie Vardy, posted on Instagram, “Struggling to find the right words….but to me you are legend, an incredible man who had the biggest heart, the soul of Leicester City Football Club,

“Thank you for everything you did for me, my family and our club. I will truly miss you…. may you rest in peace… #theboss”