“Sanches won it for Bayern” – Kimmich

Renato Sanches has come in for some high praise from fellow Bayern Munich star Joshua Kimmich, with the Germany right-back saying the young Portuguese is the reason for their win against Mainz on Saturday.

Renato Sanches has come in for some high praise from fellow Bayern Munich star Joshua Kimmich, with the Germany right-back saying the young Portuguese is the reason for their win against Mainz on Saturday.

Leon Goretzka scored for the Bavarian first, before Jean-Paul Boetius grabbed an equaliser at the Opel Arena. Thiago Alcantara later snatched what proved to be the winner soon after the hour mark. Most of the Bayern players raced towards the Spain midfielder after his strike, but Kimmich took a diversion via Sanches first, something he later explained. 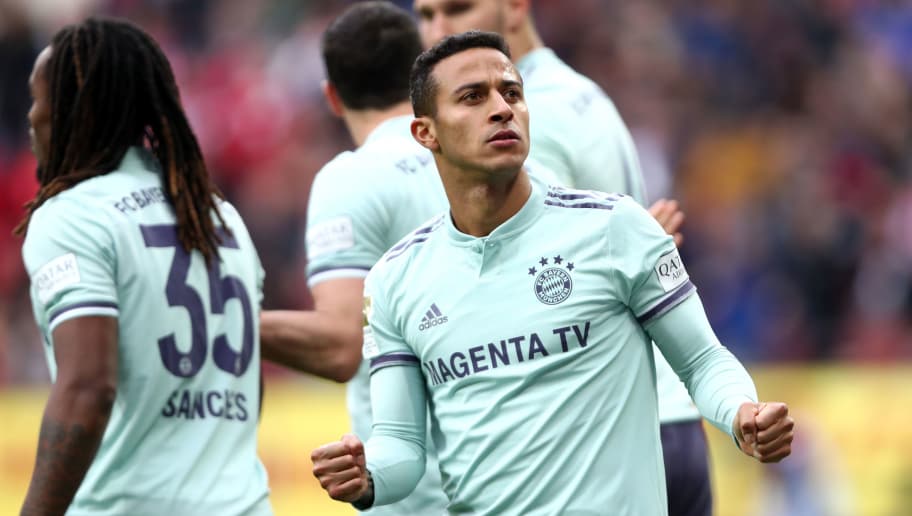 Thiago Alcantara celebrating after scoring a winner for Bayern Munich

“The second goal, it’s [Sanches] that won the ball,” he told Sport1. “The determination he showed to win back possession ultimately won us the game. Of course, [Robert Lewandowski] also played the ball well and Thiago finished it, but it’s not always the scorer who decides the game.”

Sanches was a European champion with Portugal and Golden Boy winner when he joined Bayern from Benfica in 2016, but initially struggled to settle at the Allianz Arena and spent last season on loan with Swansea City.

The midfielder, now 21, appears to be settling into his stride under Niko Kovac’s guidance, though, and Kimmich is full of admiration for the powerful midfielder who now seems to have the mental strength to go with his physicality.

“I take my hat off to him,” continued Kimmich. “It takes some guts to come here alone at 18. He didn’t have it so easy the first time around but then to come back and clearly state that he wanted to succeed – it’s remarkable how he’s done that, mentally.”