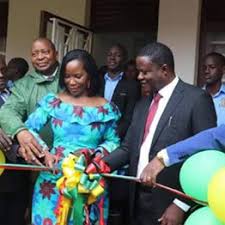 The hand over was officiated by the Outgoing KCCA Executive Director, Jennifer Musisi on Wednesday October 31, 2018 at a function held near Makerere main gate.

The project was a package that included a well renovated Makerere main gate, tarmac and traffic light on University roads as well as the perimeter wall.

Prof Barnabas Nawangwe, the Makerere university Vice Chancellor, expressed his gratitude towards KCCA and confirmed that the project is the biggest infrastructural development at the University since its start in 1922.

“We are proud of what we have achieved through our partnership with KCCA and we shall try to maintain the infrastructure put in place. This is one of the best main gates I have seen all over the world; it is a symbol of our pride,” Prof. Nawangwe said.

The project was jointly sponsored by Makerere University and KCCA through the Kampala Institutional and Infrastructure Development Project (KIIDP 2) which was funded by the World Bank.

Makerere had surrendered part of its Makerere hill road to KCCA for road expansion. This was reciprocated by renovating the University main gate.

The executive Director challenged the Makerere management to use resources from Uganda instead of running after donors.

“We have capacity as Ugandans to develop our own country, it is divisions that set us back,” said Musisi.

Musisi revealed that the project took less fund than the planned 7 billion sum.

“So far, we have spent about 6.9billion, there are a few things we haven’t done like paving the parking lot at the university mosque and constructing toilets,” ED Musisi confirmed.