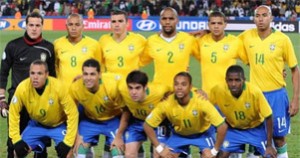 Brazil is at the 2010 FIFA World as the leading favourities to lift the cup as they prepare to host the World Cup in 2014. The four time World Cup champions have a team to beat, as they always have and everyone is expecting them to top Group G where they bface Portugal, Ivory Coast and North Korea whom they face in their opener.
The fans’ at times vitriolic reaction to Brazil’s results and performances particularly early on in the qualifying phase illustrates just how demanding they can be. Despite ending the preliminary event on top of the standings, after recording nine wins, seven draws and two defeats, and having clinched a South Africa 2010 berth with three matchdays to spare, the Auriverde camp had been subjected to a torrent of abuse after successive goalless home draws against Argentina, Bolivia and Colombia. Dunga’s charges really hit their stride from April 2009, however, racking up five wins in a row including two landmark away results: a 4-0 humbling of Uruguay in Montevideo and a 3-1 defeat of arch-rivals Argentina in Rosario. It was the latter which confirmed their passage to South Africa.

Star players of Brazil
Picking just a few names from a country so prolific at producing footballing talent is no easy task, though 2009 did underline the importance of certain key players. Starting between the sticks and we have keeper Julio Cesar, whose safe hands are a vital feature of A Seleção’s miserly defence. The triumphant FIFA Confederations Cup South Africa 2009 campaign cemented Kaka’s place as the man Brazil look to for inspiration, a fact reflected in him taking the adidas Golden ball. Meanwhile up front, Luis Fabiano proved himself a truly world-class finisher with five goals including a priceless brace in the 3-2 final win over the USA.

The coach of Brazil
Upon taking the job in August 2006, Carlos Caetano Bledorn Verri, better known as Dunga, had already experienced the full gambit of emotions that come with playing for Brazil. Indeed, having been among the scapegoats targeted after the disappointment at Italy 1990, the powerful midfielder skippered Brazil to victory four years later in the USA. Despite the Brazilian national team position being his first coaching role, Dunga answered those who doubted his credentials by guiding A Canarinha to triumph in the 2007 Copa America, the FIFA Confederations Cup 2009 and qualifying the team for South Africa 2010 with room to spare.

Records of Brazil
– Brazil are preparing to contest their 19th consecutive FIFA World Cup finals. They are the only country to have taken part in every edition of the global showpiece.
– They are also the only country to have won the title five times: amassing a total of 64 victories, 14 draws and 14 defeats in 92 games played.
– Between 15 June 2008 and 11 October 2009, A Seleção went 19 games unbeaten.