If you asked many Ugandans who is their model woman, many will tell you, “the Nabagereka”. Readers of Uganda’s leading newspaper have always voted Nabagereka Sylvia Nagginda the best woman of the year in the newspaper’s annual polls of the best and the worst.

But for many people, the Nabagereka is a model African Woman who fulfils her roles as mother, mentor, leader in the home and takes her active place in public affairs while remaining respectable- in an era where many think being a modern woman means not being African. 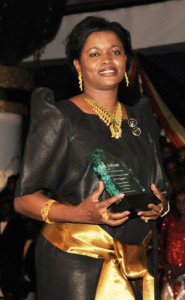 Nabagereka Nagginda has used her cultural roles and duties as the wife of Kabaka Ronald Muwenda Mutebi to mobilize people in Buganda Kingdom and Uganda for development, showed how stylish an African woman can be, inspired many young people towards better life and give live testimony that African women rooted in cultural roles have a place in modern public life.

Sylvia Nagginda Luswata is the wife of the Kabaka of Buganda. She belongs to Omusu (edible rat) clan of the Baganda.

She was born in September 1964 in United Kingdom to John Mulumba Luswata of Nkumba, Busiro; and Rebecca Nakintu Musoke who currently lives in New York

Nagginda got married to the Kabaka of Buganda, Ronald Muwenda Mutebi II on the 27th of August 1999 at St. Paul’s Cathedral, Namirembe –Kampala.

Nabagereka is the mother of Buganda kingdom’s princess, Katrina Sarah Ssangalyambogo, her only child to date. She gave birth to Ssangalyambogo on 4th July 2001 at Queen Charlotte’s Chelsea Hospital in United Kingdom. She however says her love for children is not limited to only Ssangalyambogo but it is dedicated to all children of Buganda, Uganda and Africa in general. 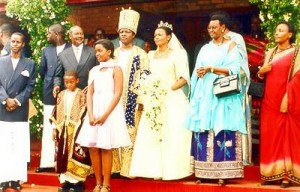 To her, she has hundreds of thousands of children to mother and she has taken on that role with a rare dedication that many people in Uganda can attest to.

The ultimate dream of Nabagereka Nagginda is to educate the country’s young girls. She has committed much of her time to this cause. Nabagereka says she works with several non-governmental organizations and other institutions of learning to visit schools, hold talks to advocate for more funding for girl child education and to inspire parents to educate their girl children and the girls to stay in school.

“An educated girl makes up a good mother, a good woman, and a good leader in future,” she tells Ultimate Media during the interview at her office in Bulango Mengo, the seat of Buganda Kingdom.

Maama wa Buganda (mother of Buganda)- as she is fondly referred to, says she has particular interest in the plight of disadvantaged school going children, especially girls.

In this regard, Nabagereka says she has been leading mobilization for money to fund Kabaka Mutebi’s Education Fund (KEF). The Nabagereka says her love for the education of girl education is in line with Buganda kingdom’s programme of promoting education throughout central Uganda and the country at large.

She also started the Nabagereka Development Foundation with a vision “To be a leading organization in education, health and community empowerment, targeting children, youth and women”. She also runs a host of their projects under the office of the Nabagereka.

The Fashionable Nabagereka, loved by many

Apart from her commendable role as an education and development activist, a model wife and mother, Nabagereka is to many women a perfect model of decent fashion. On many occasion, her dressing is the center of attention, whether it is in the Gomesi, the traditional Kiganda dress , other African fabric made dress attires, or her custom sun glasses. 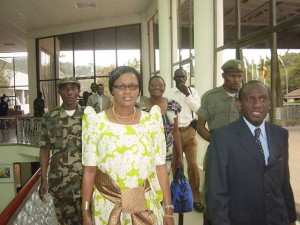 She says she enjoys dressing decently and advises all women in Uganda and Africa at large to dress decently to glorify African cultures in diversity.  This is her unwavering dedication to her husband and role in Buganda kingdom has made the Nabagereka one of the most loved and respected women in Uganda and the world at large.

For instance you might have seen the Nabagereka on facebook, the popular worldwide social network platform. She is not the one who created the face book account for herself. She says the Nabagereka page on facebook was created and is updated by some Baganda who cherish their kiganda culture, love their kingdom and support the development activities of Nabagereka.

On her fan page, you can get a true picture of people’s love for the Nabagereka and appreciation of her development work. “Mum you have really done a great job in educating the children and defending their rights more so the girl children. May the Lord bless you always. Thank you very much,” says one Ronnie Mubiru.

Nabagereka’s on the role African women

The Nabagereka, who was during the interview smartly dressed in a an expensive blue gomesi said its part of kiganda (African) culture, norms and virtues for a woman to respect and love her husband with all her heart. She says it is African for a woman to smile and humble herself while greeting guests, neighbours, relatives, husband and elders among others. She says it is also good of an African woman to love children including the non biological ones.

“I call upon African women to love and respect their husbands,” she says. Nabagereka says that she loves and respects her husband, Ronald Muwenda Mutebi, the Kabaka of Buganda.

She advises religious leaders, family elders, clan leaders, politicians and all community leaders irrespective of their levels of education, economic background or tribes to regularly advise young girls joining marriages to consider loving and respecting their husbands a career.

She was born in September 1964 in United Kingdom, and briefly studied in Uganda at Gayaza Junior School, Wanyange Girls School and later joined her City University New York where she got an associate Arts degree with honours. 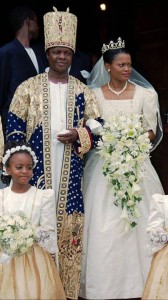 Nagginda has wide skills in corporate communications, public relations, economics, and before she got married to Kabaka Mutebi she worked at the World Bank in Washington as a research assistant at the UN headquarters.

The Nabagereka also says she is an avid liker and promoter of tourism. She became the first queen in the world in 2005 to track the endangered mountain gorillas at Bwindi National Park.

But for now, the highlight of her life is on her role as the Nabagereka, the mother of Buganda kingdom. She is aware that with the modernity increasingly affecting African communities, Buganda today must have strategies to maintain its cultures but also ensure the people are developed. Her work today is actually a mirror of culture and development work. 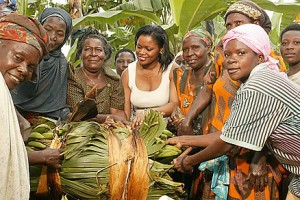 Apart from her girl child education campaigns, the Nabagereka is popular in Uganda for organizing Ekisakaate (royal enclosure), a holiday training session for teens to learn about their culture and household roles of both girls and boys.

The Nabagereka is also heavily involved in promoting empowerment of young females in higher institutions of learning through promotion of responsible living. Nabagereka is a key campaigner against engaging in cross-generational sex. She says the practice jeopardizes the future of many girls, especially those in universities and lower schools across the country.

“We encourage girls need to have confidence and self-esteem and make choices to follow in their lives,” she tells Ultimate Media in the interview.

But how would the Nabagereka like to be remembered?  “As a person who loves her nature as a woman and African culture in its diversity.  A person who loves children, promoting education, unity of all people in Uganda,” she says.

Who is the Nabagereka in Buganda? 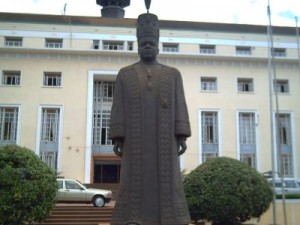 The Nabagereka is a title for the queen of Buganda kingdom. It is a recent title according to the former LCV chairperson of Luweero district, Hajji Abdur Nadduli- a respected authority on Buganda issues. The title of Nabagereka is believed to have been created at the beginning of the 20th century. In the old days the queen or Nabagereka of Buganda was called ‘Namasole.’

The office of the Nabagereka as an official institution of Buganda Kingdom was instituted in 1999 and is now one of the kingdom’s most appreciated offices in the lives of local people.