Chile’s recent renaissance has been capped by a return to the FIFA World Cup™ finals following a 12-year absence. In the international wilderness since France 1998, when Marcelo Salas and Ivan Zamorano showcased their consummate finishing skills, La Roja believe they have the resources to emulate their illustrious predecessors and advance beyond the group phase. 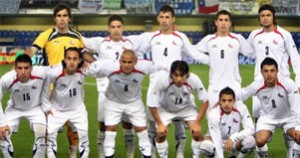 Coached by the experienced Argentinian Marcelo Bielsa, the Chileans qualified for the finals with some ease, atoning for poor performances in the qualifying competitions for Korea/Japan 2002 and Germany 2006, when they finished ninth and seventh respectively. And having finally found talented replacements to fill the void left by the Za-Sa partnership, hopes are high that they can go on and excel themselves in South Africa.

Chile’s  road to South Africa
Bielsa’s side, which boasts the youngest average age of all the South American teams, finished second in the continental qualifying group, just one point behind Brazil. That performance, their best since the group format was introduced, was rounded off in style with a spectacular 4-2 win in Colombia in October, a result that rubber-stamped their return to the world elite with one game remaining.

In total, La Roja would win 16 of their 33 points away from Santiago, an impressive statistic that underlines the resolve of the team.
Raising expectations further is the fact that the attack-minded Chileans ended the group as the second-highest scorers with 32 goals, including ten from top marksman Humberto Suazo, and recorded ten wins in all, more than any of their continental rivals.

Star players of Chile
As you might expect of a compact side that likes to get forward at every opportunity, Chile’s star performers are to be found in advanced positions. Leading the line with distinction are Matias Fernandez, Alexis Sanchez and Humberto Suazo, three players who teamed up to great effect for domestic giants Colo Colo in 2006 and who have since gone their separate ways.

The scheming Fernandez and the explosively talented Sanchez form part of a new breed of Chilean footballer anxious to build reputations abroad, while the more experienced Suazo is a lethal finisher with a happy knack for appearing in the right place at the right time.

The coach of Chile
Marcelo Bielsa was the man in charge of Argentina’s ill-fated bid for glory at the FIFA World Cup Korea/Japan 2002. While memories of La Albiceleste’s shock first-round exit in the Orient linger, Bielsa has given himself a shot at redemption by engineering Chile’s unlikely revival.

Nicknamed El Loco (The Madman) for his unique dedication to the game, the 54-year-old strategist enjoyed only a brief playing career but commands the respect of players, fellow coaches and reporters alike. The hard-working and principled Bielsa is a devoted student of tactics and an advocate of enterprising football, characteristics that have earned him huge popularity in his adopted homeland, where the fans are anxious for him to remain in the post for many years to come.

Previous FIFA World Cups of Chile
– Chile will be taking part in the FIFA World Cup finals for the eighth time at South Africa 2010.
– Their best performance to date came when they hosted the tournament in 1962 and finished third.

Goalkeepers of Chile at World Cup

DEFENDERS of Chile at World Cup

Midfielders of Chile at World Cup

Strikers of Chile at World Cup

Coach of Chile at World Cup