The International Monetary fund (IMF) has hailed Uganda government for its good macro economic policy which has led to robust economic growth.

The Macro economic policies include the fiscal and monetary policies which aim at setting better conditions for the growth and development of the national economy like stable national currency, attraction of investments and provision of markets for goods and services. 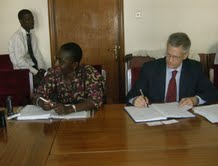 Similarly, the Senior Resident Representative of IMF in Africa, Thomas Richardson says that IMF has started providing Uganda with interest free loans because of its good economic policies.

The Chairman of the Uganda Parliamentary committee on National economy Stephen Birahwa says the benefits of good Uganda economic policies have trickled down to the grass root people hence uplifting their living standards.

Economic growth and development in Uganda however remains hampered by corruption in government institutions, lack of markets for Uganda agricultural produce, insecurity in some parts of the country, unemployment and poor transport infrastructure among others.