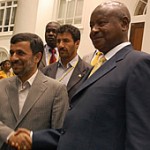 President Yoweri Museveni has said that Uganda’s economy is about to take off owing to the recent discovery of oil in the country.

“Uganda is set to grow into an economic powerhouse in East African Region,” he says. With this oil discovery in Uganda, the President appealed to investors to come and invest in Uganda and East African Community in general.

Museveni was delivering a key not address during his tour of Karamojja sub region over the weekend.

He says with the recent signing of the common market protocol by East African Community leaders in Arusha, investors from allover the world and residents of East Africa will find it easy to invest in Uganda without obstacles.