Nigeria’s Goodluck Johnson shows the worth of a good name

“A bad name brings bad luck” goes a popular saying in Tooro, a tribe in western Uganda. Does a good name do the opposite? Well, if you asked Nigeria’s acting President, the answer will be obvious. Nigeria has a new acting president who has a good name. He hasn’t stopped at just having a good name, but gone ahead to defy all odds and live up to his name.

He is called Jonathan Ebelu Goodluck. His name Goodluck doesn’t just mean a name but the man is indeed lucky. He has never been elected to any major public office in his own right but now, he is at the top helm of Africa’s most populous country. 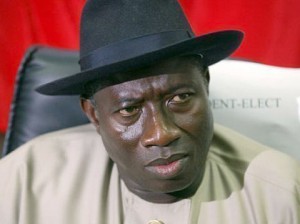 Nigerian Journalist Ben Shemang told the BBC recently, that his given name ‘Ebelu’ meaning God’s wish is equally propitious. Ebelu was given to him by his parents to wish him success.

Dr. Goodluck is a zoologist born in a poor canoe-making family in the Souther Nigerian rich oil delta state of Bayelsa. His rapid raise in federal politics has also been attributed to luck.

All his life, Goodluck’s luck gods seems to have been spending sleepless nights. Good things have been coming his way often.

While serving as deputy governor in his home state of Bayelsa, he was made governor after the impeachment of his boss Diepreye Alamieyeseigha in 2005. Alamieyeseigha was found guilty of money
laundering in the UK. Two years later, Goodluck was handpicked by the then Nigerian President Olusegun Obasanjo to run on the ruling party’s vice presidential ticket.

In February 2010 while serving as Vice President of Nigeria, he was accepted by the Nigeria’s Parliament as acting president, after a long illness in a Saudi Arabian hospital of his boss, President Umaru Yar’Adua.

President Umaru Yar’Adua who is suffering from kidney problems and an inflammation lining around the heart has never been seen in public ever since he came back from a Saudi Arabian hospital.

Now it is time for Goodluck Jonathan to shine as the country’s top man. And who knows what next will happen to this lucky man with a lucky name? Unfortunately, he wasn’t endorsed recently for the coming presidential elections because of Nigeria’s ruling party policy of alternating powers between Northern Muslims and Southern Christians. But some reports say the Lucky man has already printed posters to contest in Nigeria’s 2011 elections. Will his good name be an asset once again?