Two consultants from the U.S. Government, John Wasielewski and Steven Koltai, indicated the BiD Network approach deserved to be replicated. Investing in SMEs is the key to poverty reduction and a prerequisite for economic and political stability in developing countries. Princess Máxima also underlined the importance to facilitate access to capital to entrepreneurs in developing countries. 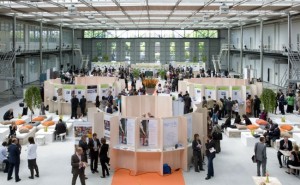 Venue for the Bid Network event

On June 2 the Investment Market Place “Growing SME’s, it’s time to invest” took place in the Hague. The day focused on connecting investors to entrepreneurs heading up small and medium-sized enterprises (SMEs) in developing countries, information on various forms of entrepreneurship development and promotion of networks.

Princess Máxima gave a speech in her capacity of “Special Advocate for Inclusive Finance for Development” for the Secretary-General of the United Nations. She stressed the importance of removing financial barriers for entrepreneurs. “In many developing countries it is very difficult to get capital for a SME to establish or grow. Transaction costs are too high and entrepreneurs also need other support, such coaching and training.”
The princess visited the Market Place, where 60 entrepreneurs from 18 countries presented their activities. She also spoke with investors and followed two pitches between an entrepreneur and a potential investor.

Steven Koltai spoke about the Global Entrepeneurship Program of President Obama’s in Muslim countries. Koltai has been COO of Warner Bros. and is now adviser to the U.S. State Department: “This period in the Obama/Clinton-era offers us opportunities for entrepreneurship in developing countries. The U.S. government shares my belief that SMEs are the engine of the economy. And sees that economic growth is a prerequisite for political and social stability. Indeed, at the door of my office hangs a sign that says “Entrepreneurship brings world peace.” “

John Wasielewski of the American aid agency USAID spoke about the promotion of profitable entrepreneurship and economic stability in developing countries. Both advisors stressed the importance of SME financing, which is a topic BiD Networkhas been successfully concerned with since its inception in 2005. Wasielewski provides, on behalf of U.S. AID, $ 2,000,000,000 in guarantees for the financing of enterprises in developing countries: “BiD Network is an unusual initiative, but one that we applaud. The Network supports commercial companies that do what banks and governments abandon: energy, clean water and much more. ”

BiD Network, is a Dutch NGO that encourages sustainable development of small and medium enterprises in emerging economies. BiD Network offers tools to the best entrepreneurs, paving the way for them to access finance. The organisations does this through training and coaching of entrepreneurs, mediating between investors and entrepreneurs, and by providing a (mostly online) platform for knowledge exchange. Entrepreneurs sharpen their business skills by taking part in competitions.
This year there were five competitions: Farmers in Business (in collaboration Agriterra and MinLNV), Women in Business (in collaboration with ING and ICCO), Access to Energy Challenge (in collaboration with GVEP and E & Co), The Nature Challenge (in collaboration with WWF) and the BiD Network Award. Thierry Sanders, director BiD Network: “This year we have received a record number of business plans, more than 600. The winners jumped out. They are all fine companies with a clever concept. Chances are that a few years from now, they will be the engines of a vibrant local economy. ”

For a detailed overview of the BiD Network entrepreneurs that participated at the SME Investment Market Place of June 2 “Growing SMEs, it’s time to invest” click here