Presidential envoy to get new cars

The Presidential convoy will soon receive a new fleet of cars if Parliament approves a 3 billion shillings budget for State House.

State House comptroller, Richard Muhinda, told MPs on the Budget committee today that the current presidential fleet of cars is old and a new fleet required to facilitate the President’s work.

Muhinda says that though the cars will continue to be utilized, they may be grounded in the near future. 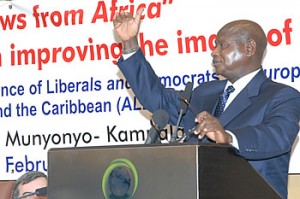 State House has denied media reports that it is seeking extra funding to take care of the Presidency.

However, State House Comptroller, Richard Muhinda explained to the media today that the funds are to settle outstanding arrears for the new Gulf Stream IV presidential jet which was acquired at about 40 million dollars.

Muhinda says that the funds are supposed to be taken to the central bank where the loan was procured.

He also requested that the debt be taken up by the Ministry of Finance to avoid creating financial constraints in the State House budget.