The Australia football team is not one to wear the favourites tag by any means but that does not mean anyone should write off the Socceroos who impressed in a 14-match Asian qualification campaign overcoming some of the continents best to finish top of Group 1 and be one of the first nations to reach South Africa 2010 FIFA World Cup. 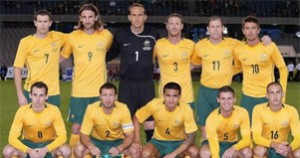 Australia finished top of the previous qualifying stage ahead of Qatar, China and Asian champions Iraq, despite losing matches to the latter two. The next and final stage proved a triumph for Pim Verbeek’s tactical acumen as the Socceroos remained undefeated across eight matches, five points clear of Japan, with Bahrain, Qatar and Uzbekistan trailing well behind.

The Australians are pitied against Germany, Ghana and Serbia and will sure need some hard work to get out of the group and repeat their 2006 performance when they toped their group after 32 years of absence at the World Cup.

Star players of Australia football team
Undoubtedly Tim Cahill has become a talisman for the national team, with the attacking midfielder recording a remarkable goal return for the national team thanks to an uncanny positional sense and aerial ability. Galatasaray wide-man Harry Kewell provides a source of inspiration on the left, with Brett Emerton playing an equally important role on the opposite flank, while in the centre of the park, the under-rated duo of Vince Grella and Jason Culina are a well-oiled and invaluable engine room. The current side are renowned for their defensive capabilities with central defender Lucas Neill and goalkeeper Mark Schwarzer an essential cog as the Socceroos leaked just four goals, including a record run of seven matches without conceding, en route to South Africa.

The coach
After a lengthy apprenticeship under Guus Hiddink, Pim Verbeek stepped out of the shadows to take Korea Republic to the 2007 AFC Asian Cup before assuming the reins of Australia in December 2007 just prior to the commencement of the 2010 FIFA World Cup qualifiers. Verbeek has brought a pragmatic approach to the team, built on a thrifty rock-solid defence, but also with capabilities going forward on the flanks. Highly respected by the players, Verbeek has instilled a strong sense of team in what is a highly motivated and focussed unit.

Previous FIFA World Cups of Australia
Australia have appeared on the world stage just twice, but are now making up for lost time by claiming a second consecutive qualification. Following a breakthrough showing in 1974, where a team of amateur players were far from embarrassed despite a first-round exit, the sports-mad nation had to wait another 32 years for a return to the FIFA World Cup. The revisit to Germany proved a success with Australia finishing second in their group behind Brazil and ahead of Croatia and Japan. It took a penalty deep into injury-time for Italy to overcome the Socceroos in the Round of 16 and continue their run to the crown.