Sebaggala files a counter petition in court against NEMA

The Mayor of Kampala, Nasser Ntege Ssebaggala has filed a counter petition in court against the National Environment Management (NEMA) on allegations that he is planting trees on his land located in a wetland.

NEMA was the first to sue Sebaggala for allegedly destroying a wetland in Bugolobi, a Kampala suburb. 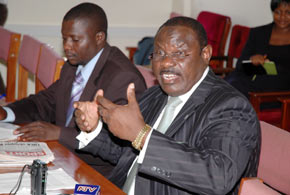 Sebaggala concedes that he sealed off part of his land found in a wetland opposite his residence in Bugoloobi, but says he only planted trees, though without prior permission from NEMA.

The Mayor now says NEMA should explain why several pieces of land falling in gazetted wetlands have been given away to people from specific villages to construct houses and factories yet he has been denied permission to plant trees.

Ssebaggala also wants NEMA to explain why it is practicing double standards by granting top government officials permission to construct in wetlands while others deemed to be supporters of opposition or poor are denied.

The Director of NEMA,  Aryamanya Mugisha however says that the Mayor should not use his land located in a wetland because it is supposed to be used by the National Water and Sewerage in treating water. Sebaggala says National Water does not pay him for using his land and so he wants to plant trees which he will in future sale and get money.

NEMA has also lashed at politicians whom it accuses of using their offices to abuse wetlands instead of protecting them.