Six years ago, Elias Simuntu was like many small scale farmers in Uganda– wondering how to earn more income from his farming activities. He grew up in Kamuli, eastern Uganda, with most people undertaking farming to get food. To meet up their other livelihood needs, some farmers sell part of their produce at low prices from traders who manage to go to their rural homes.

After growing different crops on subsistence basis for over 15 years, Simuntu in 2004 decided to farm with the key aim of earning substantial income from his farming.

“I embarked on farming only beans and maize on a bigger scale,” he says.  Speaking at his 20 acre maize farm in Kiwungu, Mbulamuti, Kamuli district, Simuntu says farming is the best chance for many ordinary Ugandans to earn income. Apart from this big maize farm by Ugandan standards, Simuntu also grows beans in another 20 acre farm, rotating maize and beans over the different seasons. 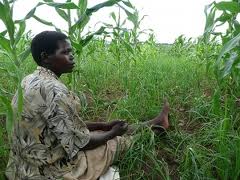 Many farmers need support to produce for the market

“I realized the only way to earn more income from farming is to grow big quantities of commodities like maize and beans which are traded by big buyers, even across borders. I had to invest in planting improved varieties, fertilizers, labour, and give more attention to my farms,” Simuntu says.

And it wasn’t long before he was rewarded for his efforts. For each acre, Simuntu harvests two tons of dry maize, a big feat for a farmer who had never harvested two tons in his earlier farming life.

But the quantities he was producing were still insufficient to attract a good buyer to Kamuli or enable him to make money through transporting his maize and bean produce to Jinja or Kampala (40 and 130 kilometers respectively) where he might get better prices for his produce.

This led him to form the Simuntu Farmers Group, in order to work with fellow farmers in Mbulamuti to produce more quantities and be able to attract a better market for their produce. Even then, competing with big food traders in the towns meant that Simuntu Farmers were always out bid whenever there was a chance of tapping good prices of big time food buyers like the World Food Programme.

Simuntu says that farmers were in 2008 boosted by the direct purchase of WFP from their group. The WFP, which is the leading single food buyer in Uganda and many African countries, through its Purchase for Progress initiative is now purchasing food items direct from small holder farmers.

“The direct purchase by WFP has helped us a lot as farmers, compared to the former system of tendering. You could tender to WFP 10 times and you never get the contract to sell them your food crops,” Simuntu says.

What is Purchase for Progress?

Stanlake Samkange, WFP Country Director in Uganda says Purchase for Progress (P4P) is a new initiative started by WFP in 2008 to increase local purchases in areas where WFP operates.

“WFP spends over a billion US dollars each year purchasing relief food. If that money is well spent locally, it constitutes a significant input in the agriculture sectors of the respective countries. Purchase for Progress is aimed at using WFP’s purchasing power to improve agriculture through increasing access of farmers to markets and improving incomes of small holder farmers. Other than focus on our food purchase and distribution for relief purposes, we want to ensure the food purchases we make bring about development by benefiting smallholder farmers,” Samkange told ARP in an exclusive interview.

Map of countries where WFP’s P4P is being implemented

David Kakuba, the Coordinator of Simuntu Farmers Group says each season, they supply an average of 1,500 tons of maize to WFP for an average price of 700 Uganda shillings, which is more than twice the best price farmers in Kamuli had ever sold their maize produce.

Samkange says the WFP is currently purchasing maize and beans directly from farmers groups in different parts of the country that produce surplus food.