Soldier sentenced to 90 years for murder 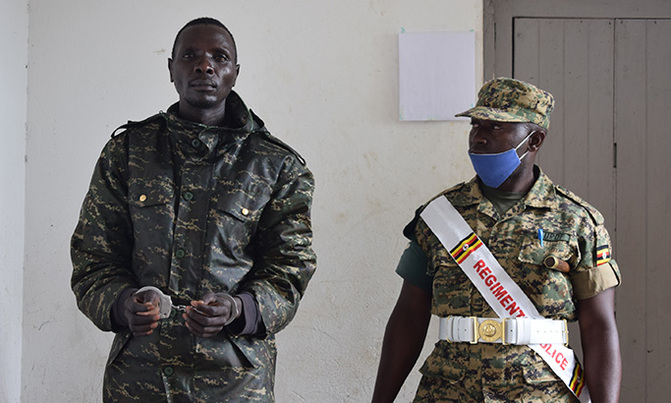 The court proved Lotukei guilty of two counts of murder contrary to subsection 188 and 189 of the Penal Code Act chapter 120.

Court heard that on October 30, 2020, at around 08:00 pm Pte Lotukei aged 36, with malice, unlawfully and intentionally shot and killed Pamela Nayebale, 26 and her son Owen Kusemererwa, 09 months after developing an argument with the former at a bar in Kitumba Village, Bunyangabu District.

While passing the sentence, the court Chairman Lt Col Felix Nyero said, “basing on the gravity of the offence committed and the evidence produced by the prosecution, the sentence is appropriate and this should serve as a lesson to others, UPDF is the people’s army that has zero tolerance to criminality.”

Despite the accused pleading not guilty to the offence, prosecution guided by Mountain Division legal officer and judge advocate Capt Ivan Nabireeba produced evidence to prove the accused guilty beyond reasonable doubt. Basing on the evidence, the state lawyer  Lt Gabriel U Mavenjina asked the court to give a maximum sentence to the accused.

Defence lawyer Lt George W Kabanda requested the court for a lenient sentence to his client since he is a first offender and that he has a big family of five wives and 18 children. He also argued that it was not his intention to kill because he was provoked while under the influence of alcohol.

The Court Chairman advised the convict to appeal against the ruling within 14 days in case he is not satisfied with the judgement.