The Government of the Republic of South Sudan (GRSS) and Sudan People’s Liberation Movement (SPLM/A) in opposition, have signed Agreements on Cessation of Hostilities and Question of Detainees.

The Chairperson of IGAD Special Envoys, Ambassador Seyoum Mesfin says that the signing of the agreements in Addis Ababa marks an important milestone in the IGAD-led mediation process that began on 2 January in Addis Ababa, in pursuit of a peaceful political solution to the crisis that has gripped the Republic of South Sudan.

He says since its breakout in mid-December 2013, the crisis has caused a grave humanitarian crisis, claiming the lives of thousands of South Sudanese and displacing hundreds of thousands not to mention the destruction of property at alarming proportions. 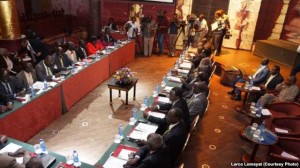 In terms of follow up steps, Ambassador Seyoum Mesfin stated that the mediation process will adjourn from the 24th January to the 7th of February 2014 to give way for the set up of various mechanisms such as a Joint Technical Committee (JTC) and a Monitoring and Verification Mechanism (MVM) that is provided for in the Cessation of Hostilities Agreement. Further consultations among IGAD Envoys and shuttle diplomacy are also planned to take place before the commencement of the next phase of peace talks.

The IGAD Executive Secretary, Ambassador (Eng.) Mahboub Maalim on his part commended the two parties on the signing of the Agreements on Cessation of Hostilities and Question of Detainees and expressed IGAD’s gratitude to the Special envoys: Ambassador Seyoum Mesfin of Ethiopia, Gen. Lazaro Sumbeiywo of Kenya and Gen. Mohammed Ahmed Moustafa El Dabi of the Sudan for their relentless efforts to bring an end to the crisis.

Ambassador Maalim also expressed IGAD’s appreciation to Member States and development partners who have supported the mediation process, particularly the European Union and the Governments of Norway, the United Kingdom (UK) and the United States of America (USA) that provided generous support. He said IGAD counts on their continued support to the mediation process and the achievement of lasting peace in South Sudan.