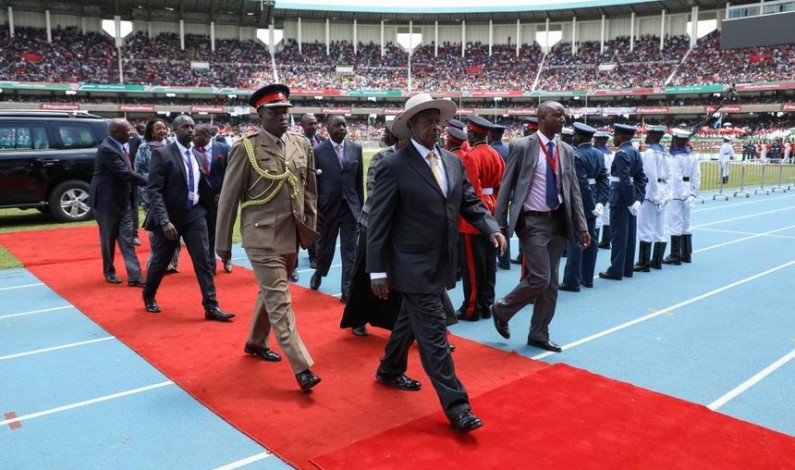 Ugandan President Yoweri Museveni will this week make a two days state visit to Kenya on Wednesday and Thursday for bilateral talks with President Uhuru Kenyatta. He will be the first leader to visit Kenya after Uhuru was sworn in for the second and final term in office on November 28 in Kasarani Stadium. Museveni […]

Youth have demanded parliament to urgently amend the National youth council to provide a legal framework under which the youth are elected as Members of Parliament so as there is no vacuum for their existence in parliament. The youth told journalists in Kampala that parliament should prevail over government to table amendments related to how […]

Countries like America, United Kingdom and South Africa where many Ugandans migrate to get odd jobs are worried after researches revealed that 45% of the Ugandan youths wherever they are live on drugs and alcohol.   This is contained in the research findings collected by Uganda Youth Development Link (UYDEL). The programmes director of UYDEL, […]

Tanzania trade route now ready for use by Ugandan traders

The governments of Uganda and Tanzania have finalized arrangements to use the southern route commonly known as Mutukula for trade as an alternative to the Mombasa route. This follows a meeting between the government of Uganda and officials from the Tanzania government held last month. Addressing a news conference, the minister of finance Maria Kiwanuka […]

Ugandan women turn to sex work to earn a living

Sections of women in Kampala are too afraid and ashamed to show their faces or have their real names used while trading their bodies for money. Many women in Uganda’s capital city Kampala have been driven to sell their bodies to put food on the table for their children, parents … for as little as […]

Uganda has beaten nine other African countries to send a representative on the UN committee of experts for rights of persons with disabilities. According to the state minister for Disability Affairs Sulaiman Madada, Uganda’s candidature garnered 66 votes out of the 117 states parties that voted and was declared a committee member effective 1st January 2013 […]

This time its poor dressing code which is making some diplomats to ignore some Ugandan social centres like beaches. The other day because of the stress some diplomats and clergies encountered, they decided to go to one of the beaches around Entebbe town but they left that place with a story to tell to their […]

Now in many European countries, when one mentions Uganda Embassy in UK, Dubai or South Africa, what come first on peoples mind are corruption, fraud and forgery. Some sources around the world have gone to the extent of referring to Uganda’s embassy in Dubai, South Africa and UK as den of corruption and fraud. Our […]