The Uganda opposition Forum for Democratic Change (FDC) party secretary for Women affairs Abooki Nyakato has appealed for quick investigations in cases involving the Uganda Inter-party cooperation (IPC) women league activist to enable them continue to carry out their activities. 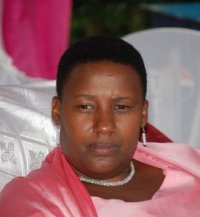 Nyakato who has been involved in an all women demonstrations aimed at disbanding the Uganda Electoral Commission (EC) to prepare ground for a free and fair 2011 elections says delay in delivery of justice derails their activities.

In a media statement seen by Ultimate Media, Nyakato says Uganda Directorate of Public Prosecutions (DPP) deliberately keeps on requesting courts to extend their hearings top distract them from carrying out their political activities.

The Uganda IPC women activists who are popularly known for breaking the security detail and entering the EC headquarters in Kampala early this year accuse the Uganda EC headed by Eng. Badru Kiggundu for being biased in favor of the ruling NRM party are in court facing charges related to holding illegal demonstrations.

Nyakato says IPC Women league will continue holding peaceful demonstrations to demand for the disbandment of the EC and for the enactment of better electoral laws despite continued government threats and intimidations.

In his state of union address, Uganda president Yoweri Museveni indicated that the government will not heed to Uganda opposition calls to disband the Uganda current Electoral Commission.