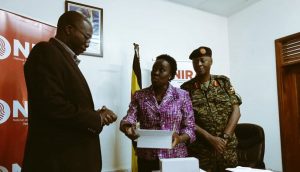 The National Identification and Registration Authority (NIRA) has handed over 50 biometric card readers to Uganda Communication Commission (UCC) to aid in the process of simcard replacements and swaps. The handover was officiated by NIRA Executive Director, Ms Judy Obitre-Gama.

These machines will in turn be handed over to Telecommunication companies soon to aid them through the process of replacing and registering new simcards that had been halted by UCC following cases of simcard misuse by criminals.

Following the handover, Ugandans who want to replace or register their SimCards will no longer be expected to go to NIRA offices for verification but will only need a police letter and their national ID.

According to UCC Director for corporate affairs, Fred Otunnu, the commission is working tirelessly to make sure that by Monday 16th April 2018 Ugandans can be able to replace simcards easily. He further said they are aware of frustrations Ugandans have been going through to replace their stolen simcards. Now that the machines are availed, they hope the situation will go back to normal.

There has been a general outrage from Ugandans ever since UCC issued a directive stopping the sell, swap and replacement of simcards by all telecom companies a few weeks back.

Mr Otunnu assured Ugandans that 98 percent of the final phase that will ensure that they have their simcards replaced is complete.

The application program interface, which will integrate systems from telecoms through UCC into NIRA database, will enable real time verification to empower the licensees with simcard authenticity.