Algeria is arguably Africa’s surprise representative at the 2010 FIFA World Cup having not appeared at the World cup for the past 24 years. Everyone expected Egypt to beat Algeria in the qualifier playoffs but the Les Fennecs (the Desert Foxes) beat Egypt after having overcome Sudan in another tight tie. 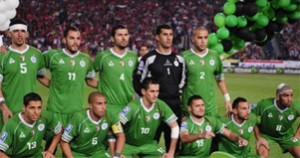 They won all six of their home games in the second and third qualifying rounds but lost three of their away visits, while drawing twice and winning the other game. As a result, they finished one slender point ahead of Gambia, Senegal and Liberia in their first qualifying group, before ending on equal terms with the Pharaohs in their second, and bringing about the need for a play-off on neutral terrain. The duo nonetheless came in eight points ahead of Zambia and 11 ahead of Rwanda.

Algeria won the CAF African Cup of Nations since appearing at Mexico World Cup in1986, but they spent a long time in the wilderness before slowly working their way back as a competitive force and the world will be watching to see what they can deliver.

Coach Rabah Saadane will look to scorer of the goal that took Les Fennecs through to South Africa, Antar Yahia is one of the pillars at the back for his team, a status he shares with Madjid Bougherra, Nadir Belhadj and goalkeeper Lounes Gaouaoui, although back-up custodian Fawzi Chaouchi is now making serious claims on the gloves. Midfield is Algeria’s strength, meanwhile, with captain Yazid Mansouri spreading the ball around and forward-thinkers Karim Ziani and Mourad Meghni the most likely players to spark danger. Lastly, striker Karim Matmour has steadily been proving himself more than useful on the right wing.

“Our qualification has made it possible for the country to put itself back on the map. It’s a joy and even an honour to be at the origin of that. I’m touched to the see the happiness we have given our people. It’s a splendid example to have set the young,” says Rabah Saadane, Algeria’s coach.

Previous FIFA World Cups by Algeria
South Africa will mark Algeria’s third appearance at a FIFA World Cup finals, and they will be looking to graduate from the group stage for the first time in their history. In 1982, they made history by defeating West Germany 2-1 and Chile 3-2, only to lose 2-0 to Austria. Four years on from their debut, with a certain Saadane in the dugout, they shared a 1-1 draw with Northern Ireland before losing 1-0 to Brazil and 3-0 to Spain.