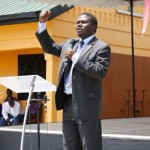 The President General of the Democratic Party (DP), Norbert Mao has said voters in Buganda region support his bid for presidency.

He says he is counting on Buganda vote to win 2011 polls.

Addressing the people of Mbirizi on Masaka-Mbarara road today, Mao said Buganda vote has a big impact on the out come of presidential elections.

He says Buganda has a master key for Uganda’s politics because of their big population.

Mao has been seen many times kneeling before the Kabaka of Buganda, Ronald Muwenda Mutebi II.