The Indomitable Lions as the Cameroon national football team is called are one of Africa’s perennial representatives in the World Cup.

Though their light may have faded somewhat since they brightened up the world stage at the 1990 FIFA World Cup™, Cameroon are not a side to underestimate at the 2010 FIFA World Cup in South Africa. The top African nation in FIFA’s rankings, they also bring Africa’s richest pedigree to the finals. They have appeared a continental-best five times in the World Cup, and no other African side has yet eclipsed their historic run to the Italy 1990 quarter-finals – though Senegal equalled the achievement in 2002.

However, the team have not managed to advance past the group stage in three finals appearances since then, winning just once in their nine matches. They lost out on Germany 2006 entirely after missing a penalty kick in the final moments of their last qualifier against Egypt. But the long road to the 2010 World Cup has forged considerable momentum behind what many Cameroonians are hoping is the right mix of players, and a new generation of Roger Millas and Francois Omam-Biyiks. 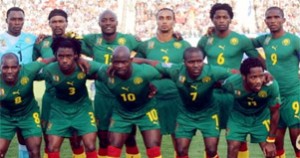 Though the 2-0 victory in Morocco that clinched their qualification was straightforward enough, Cameroon had in fact completed an impressive turnaround in a campaign that started with just a draw from their first two matches. Two victories in four days over contenders Gabon were followed by a comprehensive 3-0 defeat of Togo, and Cameroon’s four consecutive wins were more than enough to reach South Africa. In the end, the team, led from the back by the likes of veterans Geremi Njitap, Rigobert Song and goalkeeper Idriss Carlos Kameni, gave up just two goals in six final round contests.

The star players of Cameroon
Eto’o scored a total of nine goals in 11 qualifiers, and the world class striker will be the first player opposing coaches try to stop. The promising Pierre Webó is the other main threat up front, while Jean Makoun, Stephane Mbia and Alexandre Song give the midfield a classy but rugged edge in front of mainstays Song, Geremi and Kameni.

The coach of Cameroon
The reversal of fortune for Cameroon coincided with the arrival of no-nonsense 45-year-old coach, Frenchman Paul Le Guen, who took over from German veteran Otto Pfister after the slow start. Le Guen had previously taken charge of big clubs Lyon, Rangers and Paris St. Germain, and he brought a sea change in attitude and professionalism to the side. His controversial decision to hand the captaincy to three-time African player of the year Samuel Eto’o in place of long-time captain Rigobert Song turned out to be just what the two players and the team needed.

Cameroon Record
• Cameroon were eliminated at the group stage of Spain 1982 despite not suffering a defeat. They lost out to Italy for second in the table on the goals scored ti-ebreaker after three draws.

• Cameroon have played in 17 FIFA World Cup matches, the most of any national team from Africa. Their 1-0 defeat of holders Argentina to kick off the 1990 FIFA World Cup is one of the great upsets in the history of the event.

• Roger Milla was a record 42 years and 39 days old when he scored for the Lions against Russia in the 1994 World Cup. He was also the first African to play in three World Cup finals.