Uchumi asked to negotiate instead of following legal process 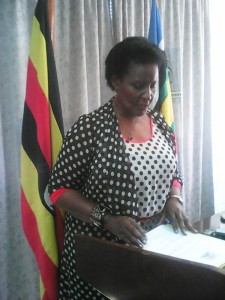 The Uganda and Kenya governments have forced the suppliers and employees of the closed UCHUMI supermarket to resort to negotiation instead of pursuing legal process for their payment. The minister of trade and industry Amelia Kyambade says that the meeting sat on Wednesday tlast week in Nairobi, Kenya discussing the closure of UCHUMI supermarket after Uganda government had met the affected parties early  January and agreed  the court case be withdrawn.
The Ugandan delegation to the meeting in Nairobi was led by the permanent secretary in the ministry of trade and industry Ambassador Julius Onen and Kenyan delegation was headed by the political and diplomatic secretary in the ministry of foreign Affairs and international Trade Ambassador Tom Amolo. Both governments agreed to form an inter-governmental 10 man committee to address all issues on unpaid claims by Uchumi supermakert in Uganda.
The minister said that each side will have 5 representatives  including the representatives of  the creditors of Uchumi supermarket.
The committee will include Uchumi representatives from Kenya, Kenya high commissioner in Uganda, principal secretary of Kenyan foreign Affairs, Ugandan permanent secretary of trade and industry, legal experts appointed by government, 2 representatives of Uchumi claimants in Uganda among others. The formed committee will review all the claims from the suppliers who include landlords, as well as employees .

The minister of Trade and industry Amelia kyambade says uchumi suppliers should withdraw the court case to enable government  use inter governmental bi-lateral process to recover their money and she urged all suppliers who have not reported their case to the ministry of trade to quickly do it so that they are include in the verification process. She says that the two governments pleaded with Uchumi not to file a petition in court seeking for bankruptcy declaration because this could cause Uchumi claimants to not paid. She says that there will be new regulations governing super markets to stop such incidences that were caused by Uchumi.