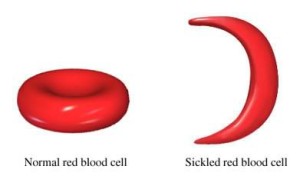 Health officials are worried that the sickle cell burden in Uganda is growing higher each day which is likely to affect the future generation. They say that every year over 20,000-25000 babies are born with sickle cell which is not compared to any other disease.

Sickle cell disease is an inherited disease from one’s parents especially when both parents have a gene for sickle cell the new born will automatically be a sickle cell carrier.

According to national program coordinator at Central Public Health Laboratory in Kampala Charles Kiyaga some areas which have more sickle cell cases are Lango, Acholi, and Busoga and Bugishu regions. In an interview with radio Simba, Kiyaga explains that the burden is high yet the population is not sensitized about the disease. On the same note Kiyaga tells us that ministry of health started newborn sickle cell screening especially in districts that have been realized to be at high risk.