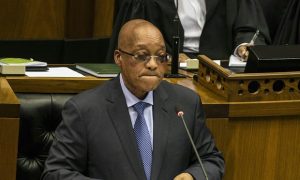 The South African president, Jacob Zuma, has survived an attempt to impeach him after the African National Congress party gave him its backing. But his long-term future is still in doubt after a string of influential figures called on him to step down.

The motion to unseat the president was launched by opposition MPs after the constitutional court ruled that he had ignored an order to repay state funds spent on a lavish upgrade of his private home.

The ANC, which controls almost two-thirds of parliament, ensured the president won, with 233 MPs voting against the impeachment motion and 143 in favour.

But, beyond parliament, there are growing calls for Zuma to leave, arguing his reputation has been irretrievably tarnished by the ruling on his home renovations and a second controversy involving the Guptas, a family of wealthy industrialists with close ties to Zuma.

The Guptas have been accused of exploiting their relationship with the president to choose pliable candidates for top cabinet and business jobs in a scandal that came to light after the country’s respected finance minister, Nhlanhla Nene, was abruptly sacked in December.

Zuma has fended off accusations of corruption, influence-peddling and rape since before he took office in 2009, but the current swirl of scandals over both his home renovations and ties to the Guptas is arguably the biggest challenge he has faced.

At the weekend one of the country’s most respected anti-apartheid fighters, an activist tried and jailed alongside Nelson Mandela, called for him to step down. Ahmed Kathrada made the call in a letter to Zuma after the court ruling.

On Tuesday the respected former finance minister Trevor Manuel also joined those calling for Zuma to go, saying he had violated his oath of office.

Zuma did not attend the proceedings in parliament. On Friday, the 73-year-old president gave a televised address to the nation in which he apologised and said he had never knowingly or deliberately set out to violate the constitution.

Several major firms have cut ties with the Guptas, saying the association is too risky.

The South African branch of global accounting firm KPMG, Barclays Africa and investment bank Sasfin have all announced they will no longer do business with one of the Gupta family companies, Reuters reported.

“I can assure you this decision was not taken lightly but in our view the association risk is too great for us to continue,” Hoole said in the email, seen by Reuters. “There will clearly be financial and potentially other consequences to this, but we view them as justifiable.” Oakbay confirmed the end of the 15-year relationship.

Barclays Africa, which runs South Africa’s biggest retail bank, Absa, also confirmed it no longer had a relationship with Oakbay, which is valued at 16bn rand (£752m) on the Johannesburg stock market. In an annual report from last August Oakbay listed Absa as its bank, Reuters reported.

A spokeswoman for Sasfin told Reuters on Monday the bank’s relationship with Oakbay would formally end on 1 June.

The Gupta family denies exploiting their relationship with Zuma and say they have been made scapegoats for the country’s economic woes and used as pawns in internal party politics.

The Gupta family emigrated from India in 1993, seeking business opportunities in post-apartheid South Africa, and now preside over a wide range of corporate interests from mining to IT and media.

Their close ties to Zuma, whose son sits on the board of at least six Gupta-owned companies, and extravagant lifestyle have drawn criticism before, perhaps most memorably when they used an air force base to fly in guests for a private wedding.