Tracing Gashumba’s woes with the law 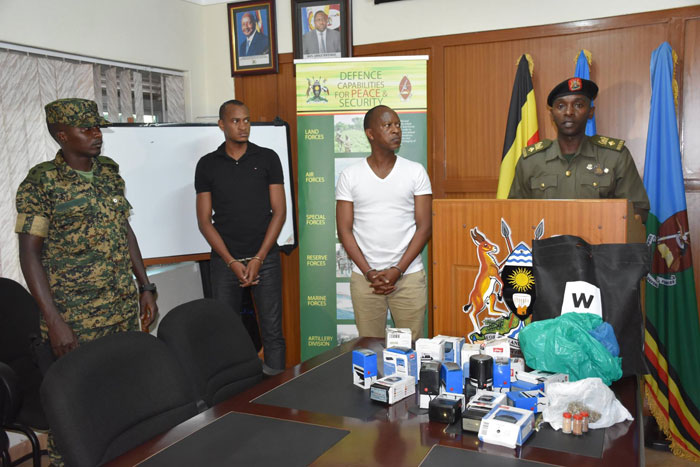 Gashumba (white T-shirt) paraded in front of the press. On the desk are several items like stamps and passports that the army said were used to pursue fraudulent activities. PHOTO MODVA

Frank Gashumba a renowned social and political commentator and his brother Innocent Kasumba alias Mutabazi Simon were arrested on Saturday by Chieftaincy of Military Intelligence (CMI) for possession of illegal passports, fake stamps of different government ministries and drugs like marijuana and cocaine.

The two have since been questioned about their link with fraudsters who impersonated Ministry of Defence and Veteran Affairs officials in attempt to defraud some foreigners.

It is alleged that the gang purported to be contracted by Defence to supply UPDF with hundreds of military trucks. Security is also probing Franco Gashumba Malingumu aka Sentongo Frank Disans over two passports with his photo by bearing different names and different numbers.

But Who Is Gashumba?

Frank Malingumu Gashumba profiles himself as a social activist, motivational speaker and entrepreneur, whose purpose in life is driven by Mahatma Gandhi’s quote, “I believe in self-empowerment. Be the change you want to see in the world”.
Born on December 3, 1974 in Villa Maria, Masaka District, Gashumba is a single father of two daughters, and is a Ugandan of Rwandan origin.
He attended St Francis Primary School in Masaka, before moving to Aga Khan Senior Secondary (Masaka). In 1996, he graduated from Nkumba University where he attained a Bachelors degree in Business Administration.

His clashes with the law

His life is masked in controversies but enthusiastically admired by many not considering that they are at times left guessing on who the real Gashumba is.
To his haters, as he often brands them, Gashumba is a braggart who will seize any opportunity to seek attention.

In 2007, Gashumba was detained at Central Police Station [CPS] on similar charges of fraud and being a conman.

The next year in April 2008, he was arraigned before Buganda Road Court and charged with obtaining money by false pretence from a one Abdul Ssali totalling to Shs800,000. He was released on a cash bail of sh100,000.

Gashumba was in the same year accused of malicious damage to property worth sh1m. He allegedly vandalised Peace Bashemweireâ’s vehicle, which he had hired to do his private business.

Also around the same period, Rose Lule, accused Gashumba of conning her of sh2m, for which he was reportedly to help her acquire travel documents to the UK in 2007. The Police at the time said Gashumba was accused of issuing a bounced cheque of sh7m to Vasco Othero.

Gashumba about his different appearances in court at the time said: “As a man, I am assured of three things, being incarcerated, paying taxes and dying. These give me hope to stand up every time I fall.”

Three years later in February 2011, Gashumba was convicted for conspiracy to defraud DFCU bank and later arrested for trying to defraud EYG Group a Turkish company dealing in fire tenders of $28m (Shs79.9billion) on pretext that they wanted to buy fire trucks on behalf of the government of Uganda.

Now six years after, he is accused of impersonation and obtaining money by false pretence [about $12m] under the cover of a company named Flagship group purported to be contracted by MODVA for out sourcing.

He had invited investors to Golden Tulip Hotel in Nakasero for a meeting over a purported deal to supply UPDF with hundreds of Military Trucks.

The arrest of Mr Gashumba comes after President Yoweri Museveni’s directive to CMI to carry out parallel investigations into the murder of Assistant Inspector General of Police (AIGP) Felix Kaweesi.

Last week, CMI arrested and arraigned nine people including seven police officers and charged them before the General Court Martial for kidnap and espionage.

However, unconfirmed reports say Mr Gashumba had been picked as part of a wider network of individuals who are spying for the government of Rwanda.