The first time Terry had to travel after having her baby was an interesting time; there was a lot of  preparation that had to go into the trip. One of the things she needed to check off the long list was getting a passport for her boy; four months old and she had to have his travel documents. To get his passport she needed to present his birth certificate. Thankfully they had received his birth certificate 6 weeks after his birth.

Terry was fortunate to have these documents. But how many parents out there have birth certificates for their children; how many have registered the births? Birth registration is a permanent and official record of a child’s existence. The child who is not registered at birth is in danger of being denied the right to an official identity, a recognized name. A birth certificate protects the holder against early marriage, child labour, or detention and persecution as an adult; the unregistered child may be unable to apply for a passport or formal job, open a bank account, and get a driving license or a marriage certificate. It is also an essential element of national planning for governments.

“The child shall be registered immediately after birth and shall have the right from birth to a name, the right to acquire a nationality and as far as possible, the right to know and be cared for by his or her parents.”- Article 7 of the 1989 U.N. Convention on the Rights of the Child (CRC)

UNICEF global databases, 2016, based on DHS, MICS, other national household surveys, censuses and vital registration systems have records of children reported to have a birth certificate regardless of whether or not it was seen by the interviewer, and those without a birth certificate whose mother or caregiver says the birth has been registered. 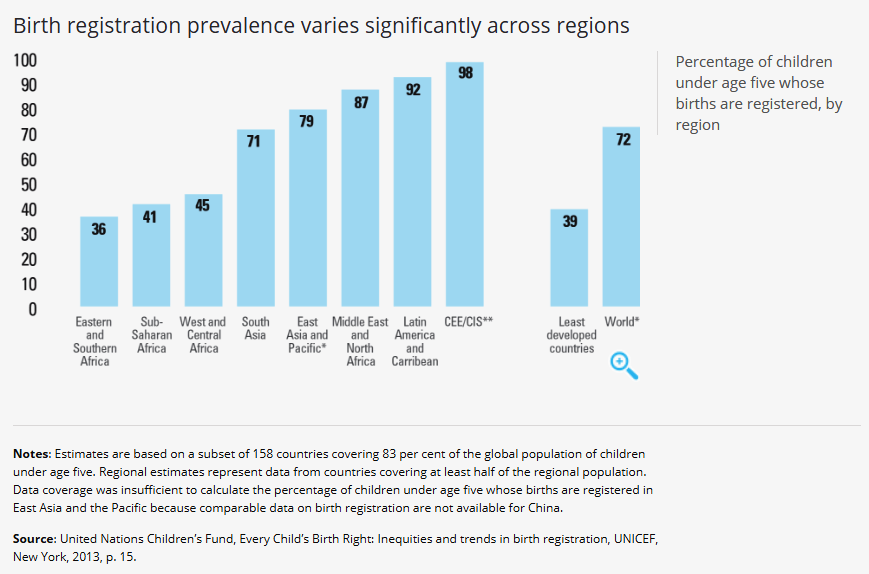 So how does Uganda fair in all these statistics? Sadly, from the data, we note that Uganda falls below the regional statistic; only 3 in 10 births are registered, meaning 70 per cent of births in the country go unregistered; 7 in 10 children have no official record of their existence.

Within three months of the date of birth of a live child, the father or mother of the child shall register such particulars concerning the birth as
may be prescribed with the registrar of the births and deaths registration district in which the child was born. – Births and Registration Act

Gorreti a mother of two says that ‘With my first born I assumed that he was registered at the hospital and I have never followed up since. For my second born we were given an immunisation card at the hospital and told to go register him at Kololo; we have not yet done that.’ Crystal who has four children said that her first born was registered because they were told to do so, however the others have not been registered because of the busy schedules of the parents.

Of the births that are registered urban areas record a slightly higher number than rural areas. 38 per cent of births in the urban areas are recorded compared to 29 per cent of those occurring in the rural ares. Distance to the nearest registration facility plays a big part in these numbers. It is noteworthy that the Uganda Urban Population stands at 16.8% in 2017;  a low representation of the population.

Thankfully of the registered births male and female have equal representation with each gender having 30 % recorded births. However, when we look at the wealth of the families, the richest have registered almost double the number of those in the poorest families. We therefore see a correlation between wealth and knowledge, The poor do not understand the necessity of birth registration, and unfortunately a high under five mortality rate (53 per 1,000 live births) does not give them much hope either since these deaths mostly occur among the poor.

The government of Uganda has procedures in place to ensure that all who need to register an infant do it. In 2011 they moved to automate the registration of births, deaths and marriages with the Mobile VRS, moving away from the paper forms. However, in light of all the data it is clear that government and other stakeholders need to carry out mass sensitization on the importance of birth registration. Regardless of region, wealth or sex, all births should be equal. Over 70 years ago, registration was not the norm and individuals from that time do not have documentation of their birth and are not able to point out their birth dates. Some, like President Museveni, are left to depend on church records and the like. The right to birth registration and all it comes with is one for every child who is born. For the rest of their lives these children are going to be fighting for different rights but the right to official recognition should be the first one to have.