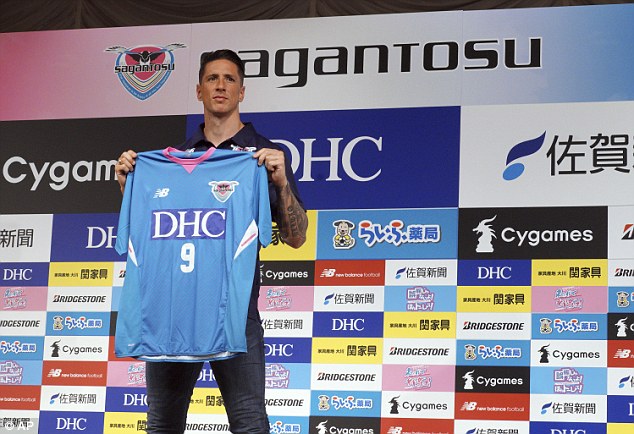 ‘It’s been a long trip but I’m not tired and looking forward to playing for Sagan Tosu as soon as possible,’ the 34-year-old Torres said at a press conference in Tokyo.

Torres also held discussions with Football Federation Australia and officials of A-League club Sydney FC but opted instead to sign with Sagan.

The Spaniard tweeted: ‘Grateful to everyone for the warm welcome I’ve had at Tokyo, in my presentation as Sagan Tosu player.’

He will wear the No 9 shirt he made famous during successful spells at Atletico, at Anfield and with the Spanish national team.

The veteran was presented by club president Minoru Takehara, who unveiled a scroll reading ‘Thank You Torres’.

Torres revealed last week:’I had offers from France, Germany, other clubs in Spain,’ he said, ‘but I did not want to join another European club, as I had the best end possible here with my team (Atletico).

‘I will have a good friend in the league too with Andres. It is an exciting challenge for both of us.’ 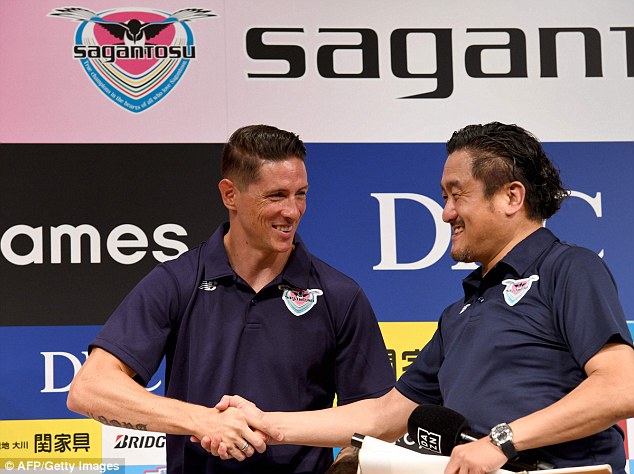 Torres finished his second spell at Atletico Madrid last season, playing 45 times in all competitions for his boyhood club as they lifted the Europa League.