Residents of Sorong district, West Papua in Indonesia have conducted a violent operation that has left over 300 crocodiles dead after killing a man.

Residents of Sorong district, West Papua in Indonesia have conducted a violent operation that has left over 300 crocodiles dead after killing a man. 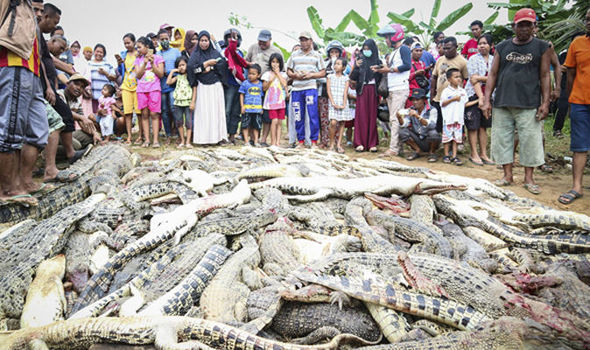 Although the crocodile farm is legal with a working permit, it didn’t stop the villagers from invading These, after the burial, equipped themselves with machetes, clubs, hummers, knives and axes killing all the reptiles regardless of the age.

“292 crocodiles, from babies to full-grown adults were killed by dozens of villagers on Saturday,” Barsar Manullang, head of the local natural resources and conservation Agency in sorong told The post.

48 year old Sugito, the victim, was, according to reports from the reserve, attacked by a crocodile after getting nearer to their bleeding pond to pick some of the feeds.

However, Ogilo, one of the local residents said that screams were heard coming from the farm after the victim had gone in  search for pastures for his cattle but, unfortunately, was found already dead, according to the USA today news.

Investigations are still ongoing to find out the circumstances surrounding the killing of Sugito and also the post- mob justice by the people because, according to Manullang, all their actions were illegal.