Cristiano Ronaldo is as dedicated as they come and he demonstrated his tremendous work-rate again on Wednesday. Ronaldo was one of Real Madrid's hardest-working players in training and it seems he has jumped right to the top of the list at Juventus.

Cristiano Ronaldo is as dedicated as they come and he demonstrated his tremendous work-rate again on Wednesday. Ronaldo was one of Real Madrid’s hardest-working players in training and it seems he has jumped right to the top of the list at Juventus.

The 33-year-old was pictured at the club’s Turin training base as he continued to build up his fitness following the World Cup. For some, being sold for £100million would bring too much pressure. But not for the Portugal international. He has had to live up to high expectation since his very early days at Manchester United. 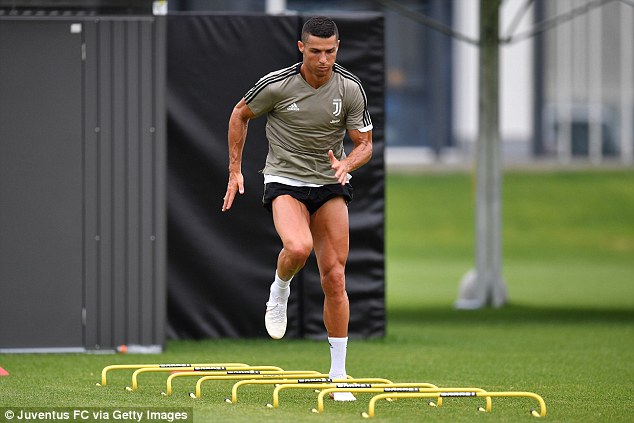 On Thursday he was showing off some of his tricks and flicks that have enabled him to remain at the top of the game for so long. Ronaldo switched between physical and on-the-ball work before heading over to where a group of fans had gathered. Once he got to them he took time to sign autographs and pose for photographs.

But while supporters in Italy have had a glimpse of him, those in the United States will not get to see Ronaldo in action over the coming days, with the 33-year-old – like Rodrigo Bentancur, Juan Cuadrado, Paulo Dybala, Douglas Costa and Gonzalo Higuain – not included in Massimiliano Allegri‘s tour squad following his World Cup exploits.

That means he will miss a clash against the Major League Soccer All-Stars in Atlanta in the early hours of Thursday morning in addition to a swift reunion with former employers Real Madrid at FedEx Field in Landover, Maryland at the weekend.

Juventus have already met both Bayern Munich and Benfica in the International Champions Cup competition, while they open the latest Serie A campaign against Chievo in Verona on August 18.

Ronaldo will hope to make his competitive debut in that fixture before potentially appearing in his first home match at the Allianz Stadium against Lazio seven days later.