Bali is an island and province of Indonesia with the biggest Hindu population. The province includes the island of Bali and a few smaller neighbouring islands, notably Nusa Penida, Nusa Lembongan and Nusa Ceningan. It is located at the westernmost end of the Lesser Sunda Islands, with Java to the west and Lombok to the east. Its capital, Denpasar, is located in the southern part of the island.

Bali is an Indonesian island known for its forested volcanic mountains, iconic rice paddies, beaches and coral reefs. The island is home to religious sites such as cliffside Uluwatu Temple. To the south, the beachside city of Kuta has lively bars, while Seminyak, Sanur and Nusa Dua are popular resort towns. The island is also known for its yoga and meditation retreats.

The southern tip is also world-renowned for its prime surfing spots such as Padang Padang and Uluwatu. Further inland is Ubud, a hill town known for its spa treatments, yoga and ecotourism, which may include a trip to a monkey preserve.

Ringing the island are coral reefs teeming with sea life, making it a hot spot for scuba diving. You can also get a taste of Balinese culture at a gamelan percussion performance or one of thousands of Hindu temples, which feature intricate sculpture and regular festivals.

Peak travel periods include July–August and mid-December–early January. The tropical climate is hot and humid year-round, extremely humid during the rainy season (October–March) and less so in the dry season (April–September). Balinese New Year, or “Nyepi”, (dates vary) is observed with 24 hours of silence and fasting. The religious festivals of Galungan and Kalingang (dates vary) are celebrated with dancing, feasts and elaborately decorated bamboo poles. The Bali Arts Festival (Jun) has traditional dances, music and night markets.

10 best things to do in Bali

The 10 best things to do in Bali take you straight to the ‘can’t miss’ cultural treasures and famous landscapes found all around the magical island of Bali. There are innumerable temples, historical sites, and spots of natural beauty spread across eight regencies. This narrowing-down of choices will get you discovering the best of Bali in no time. Go east to see the majestic ‘mother temple’ of Besakih or travel to the heartland where rice paddies offer scenic photo opportunities. From scenic vistas to cultural performances, there is something for everyone. 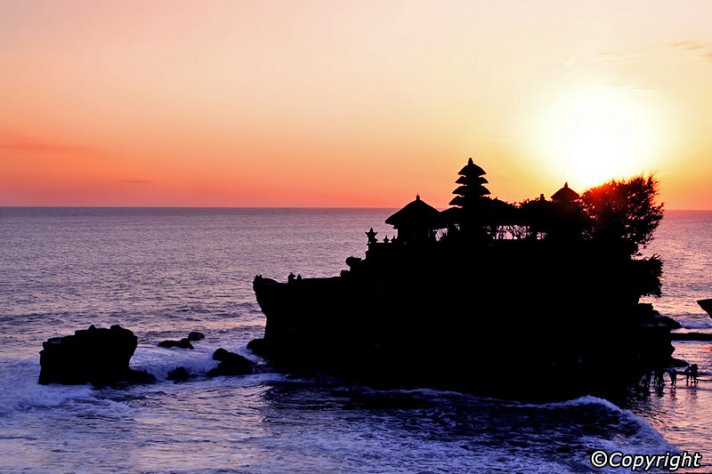 This temple is perched on top of a huge rock

Tanah Lot must be the island’s most iconic temple. This temple is perched on top of a huge rock, and surrounded by the sea with waves constantly crashing on to its base. As among Bali’s most important sea temples, Tanah Lot pays homage to the guardian spirits of the sea. The temple serves as foreground to the most picturesque sunsets.
Uluwatu Temple 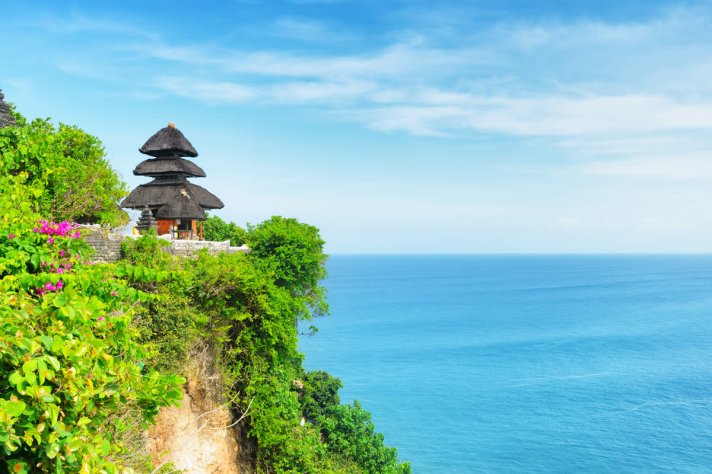 Uluwatu is among the Bali’s most important sea temples, perched on a cliff edge in the southwestern Bukit peninsula. Here you can catch dramatic sunsets such as at Tanah Lot, Uluwatu also features an open amphitheatre close by, where sunset kecak fire dances can be enjoyed. A monkey forest also borders the temple grounds. 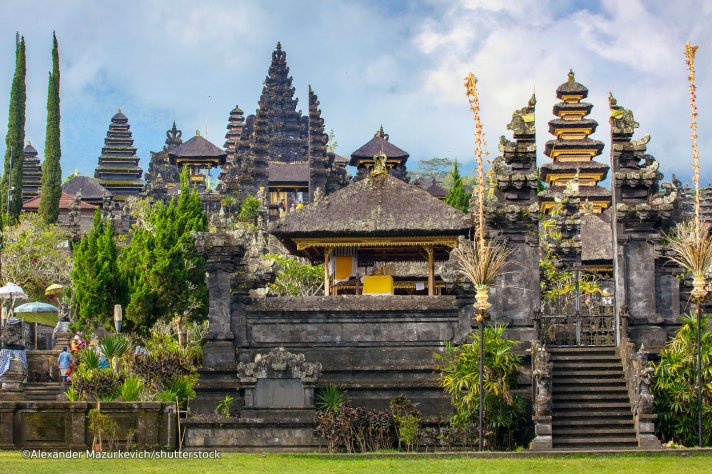 It is also known as thw mother temple of Bali

Besakih Temple, also known as the ‘mother temple’ of Bali sits on the slopes of Mount Agung, at a lofty 1,000m. Besakih is the largest of all the Balinese temples. Eighteen separate sanctuaries belonging to different caste groups surround the three main temples dedicated to Shiva, Brahma and Vishnu.
Tegallalang Rice Terraces 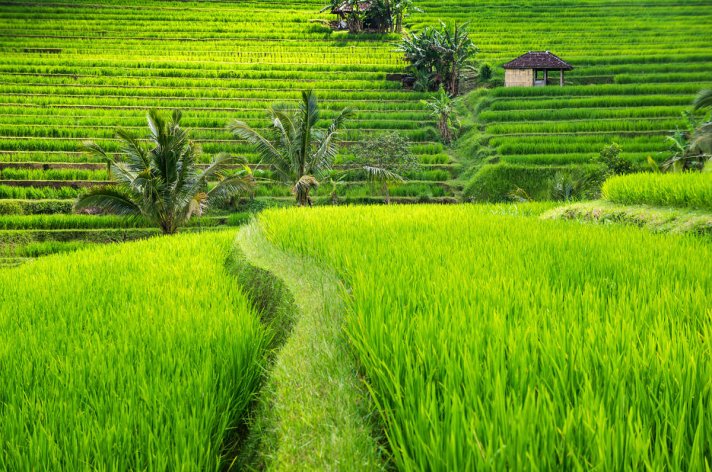 Tegallalang is famous for its scenic expanses of rice fields. And the paddies with the best vantage point are just up north from the main Ubud centre, along the road of Tegallalang. Here, roadside stalls and art shops offering items and curios of all kinds line the street, as well as small restaurants offering diners great views.
Ubud Monkey Forest 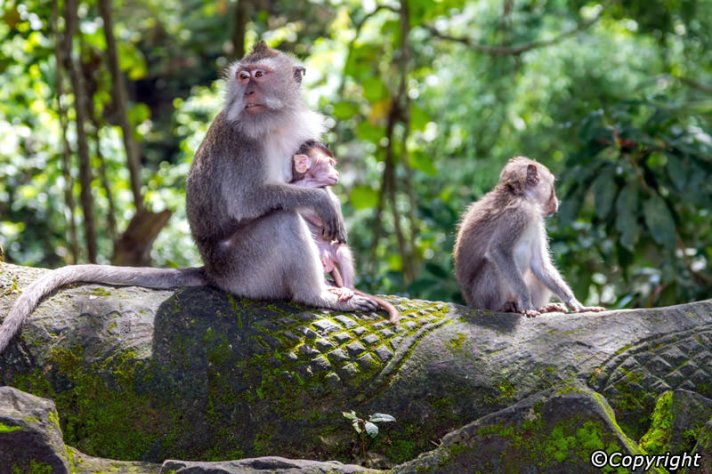 It is also known as the Sacred Monkey Forest of Padangtegal

On the fringes of the Ubud main centre, Ubud Monkey Forest is one of Bali’s several grey long-tailed macaque-inhabited forests and perhaps the best known. Also known as the Sacred Monkey Forest of Padangtegal, and by its official designation as Mandala Wisata Wenara Wana, Ubud Monkey Forest is a place of scientific research as well as a site of spiritual and cultural aspects with temples sanctified by the local villagers deep within its grounds.
Ubud Art Market 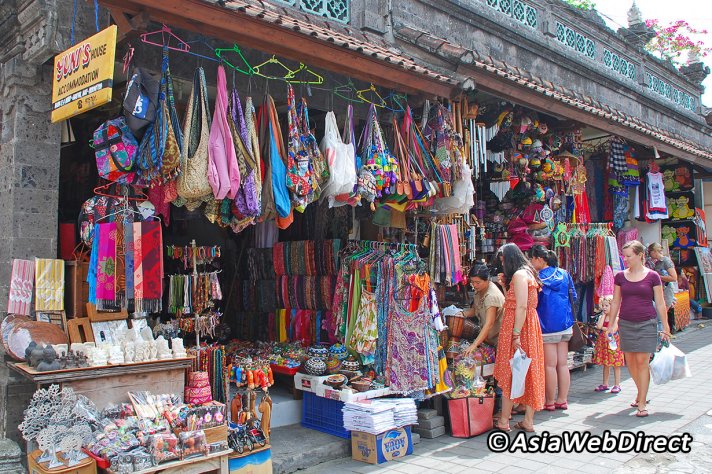 This market has many good products

The Ubud Art Market, locally referred to as ‘Pasar Seni Ubud’ is located opposite the the Puri Saren Royal Ubud Palace and is open daily. Here you can find beautiful silk scarves, lightweight shirts, handmade woven bags, baskets or hats; statues, kites and many other hand-crafted goods.
Kintamani and Mount Batur 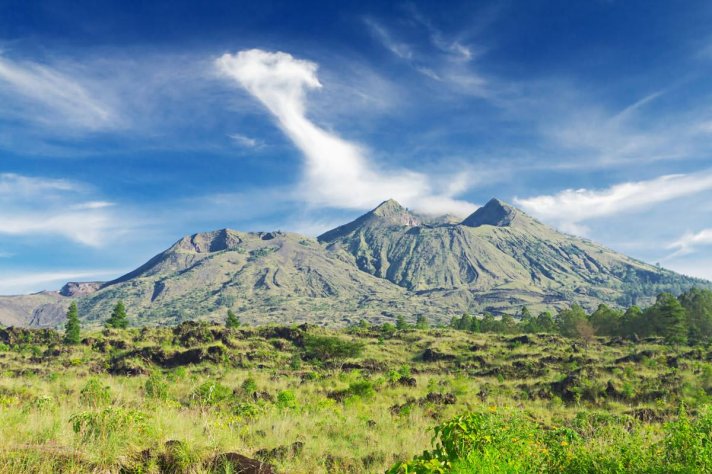 Kintamani, located in the Karangasem Regency, is home to Mount Batur and the Caldera Lake. A favourite stopover on tour itineraries to this region is Penelokan, which aptly means ‘scenic stopover’. The still-active Mount Batur volcano has erupted about 24 times since 1800, each time reshaping the surrounding landscape. 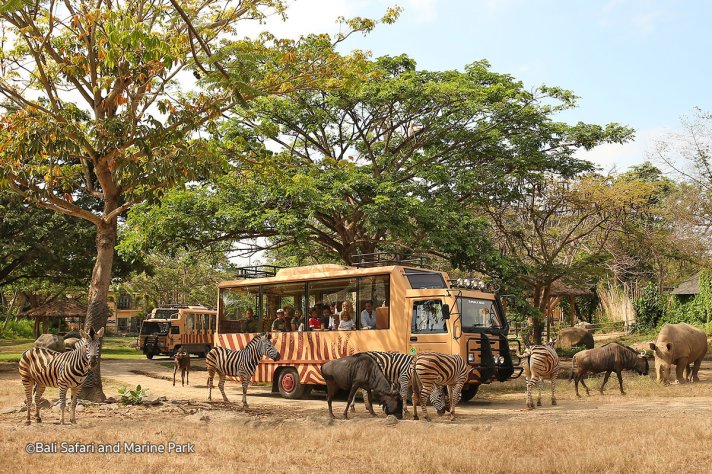 The park is home to over 60 species of animals

Bali Safari & Marine Park is Bali’s largest animal theme park. The park is home to over 60 species, all roaming freely within their enclosures built to closely mimic their natural habitats. Bus safaris take visitors on tours ‘around the world’, and animal talent shows are held regularly. Aquariums holding exotic fish specimens are nearby. 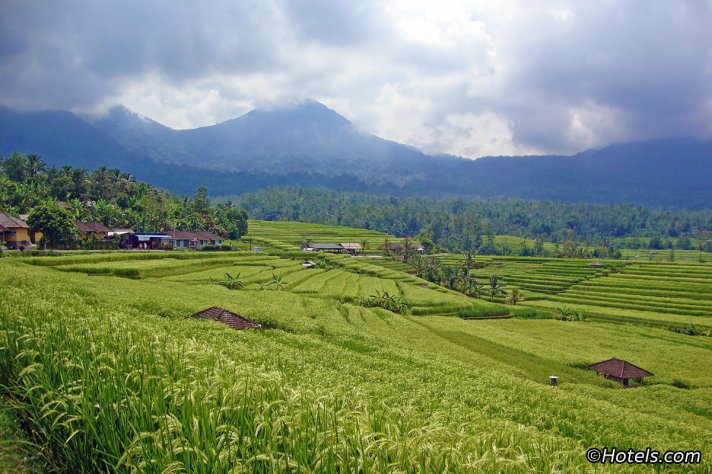 The cool highlands and the breathtaking scenery of this village

Jatiluwih rice terraces pretty much cover the region of the namesake upland village in West Bali, most famous for its landscapes that are both dramatic and truly exotic. The site is one of the island’s must-see natural panoramas on par with Mount Batur and the caldera of Kintamani. The cool highlands and the breathtaking scenery of this village at the foot of Mount Batukaru makes for wonderful photo opportunities, and serves as a soothing retreat away from the island’s crowded south.
Goa Gajah 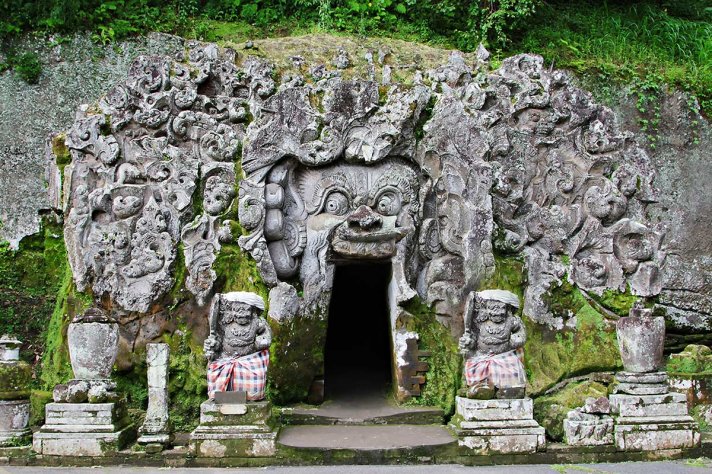 Goa Gajah dates back to the 11th century, built as a spiritual place for meditation

Goa Gajah ‘Elephant Cave’ is an archaeological site of significant historical value that makes it a special place to visit. Located on the cool western edge of Bedulu Village, six kilometres out of central Ubud, you do not need more than an hour to descend to its relic-filled courtyard and view the rock-wall carvings, a central meditational cave, bathing pools and fountains.