“It would have been great if he had used his voice for the good of people in Africa,” said Wine, whose real name is Robert Kyagulanyi. “I’m a musician but I am not allowed to stage a show in my own country because I disagree with the president. It is very disappointing.”

Museveni received a pair of signature Yeezy Boost trainers while the president gifted West with a signed copy of his book, Sowing the Mustard Seed: The Struggle for Freedom and Democracy in Uganda. 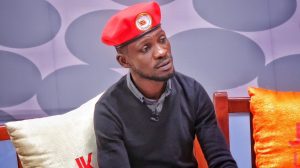 Mr. Museveni showed his gratitude towards the rappers visit and remarked that they both enjoyed “fruitful discussions” about promoting tourism and arts.

In his comment about US president Donald Trump attitude towards Africa, the Ugandan president said “I love Trump because he tells the Africans frankly … the Africans need to solve their problems, they need to be strong. It is the fault of the Africans that they are weak”

Excited West published a post on social media detailing the inspirations from his Africa tour so far especially from Fela Kuti, the popular Nigerian musician, composer and activist who died in 1997.

However, muscian Seun Kuti, son of Fela Kuti in response to Kanye posted “On behalf of the Kuti family, I want to state that the spirit of Olufela Anikulapo Kuti isn’t anywhere near Kanye West,” he said.