Lewis Hamilton claimed his fifth world championship title after finishing fourth in the Mexican Grand Prix to establish himself among the Formula One greats.

Lewis Hamilton claimed his fifth world championship title after finishing fourth in the Mexican Grand Prix to establish himself among the Formula One greats.

Red Bull‘s Max Verstappen was victorious in the race, finishing ahead of Sebastian Vettel who finished second and Kimi Raikkonnen who was third on the podium. 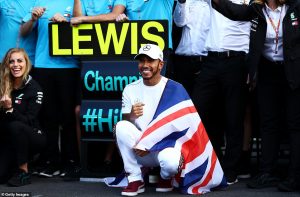 But in the end that mattered little for Hamilton, who now can’t be caught in the drivers’ standings with two more races left in the season.

Ever since joining the McLaren as an intelligently talented 13 year old, Hamilton’s stock has only gone up as he achieved the rare feat of meeting expectations with results.

His supreme talent has guided him to four world championships in the past five years to go alongside the one he won in just his second ever season, all the while breaking the mould from what many still consider to be a privileged, white man’s sport to sit on the cusp of becoming the sport’s greatest-ever champion.

After all, 33-year-old Hamilton is just the first black driver to race in Formula One, let alone win world championships.

Hamilton struggled to the end despite feeling vibrations in his car, fretting over his tyres in exasperated radio exchanges, and haemorrhaging time as his rubber gave him a mighty migraine. 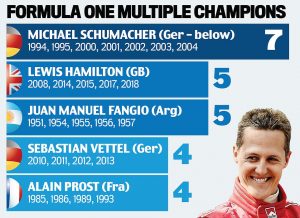 The Briton now sits joint second on the overall list of Formula One world champions, level with Argentine great Juan Manuel Fangio but still two behind Michael Schumacher whose seat at Mercedes Hamilton moved into when the seven-time champion retired for the second time in 2012.