Uganda’s ministry of agriculture has announced that it is on high alert over an eminent threat of desert locusts that have invaded the East African Region especially the neighboring Kenya.

The revelation was made on Friday by Aggrey Bagiire, the State Minister of Agriculture, Animal Industry and Fisheries during a press briefing at the Ugandan media centre. 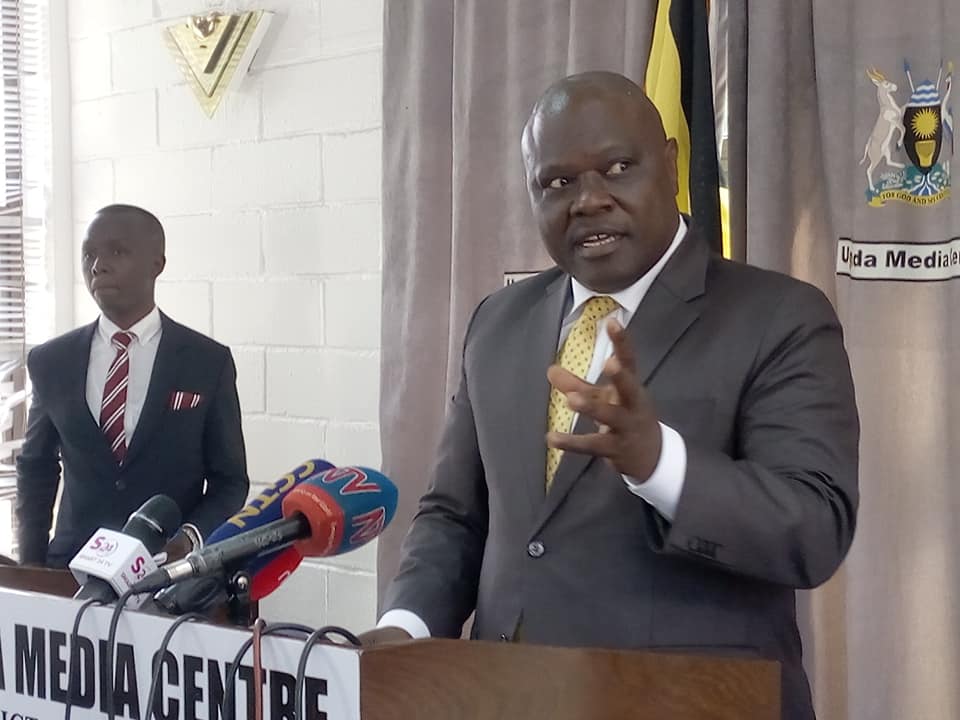 Bagiire during the press briefing on Friday

Bagiire revealed that the ministry of agriculture is now seeking Shs5 billion to cater for aircraft fuel, pesticides for control, provide for ground spray equipment and spray teams and to continuously create awareness to the population in case of an invasion.

The Minister says due to  security situation in Somalia and North Eastern Kenya (Mandera and Garissa Counties) and other factors, there are still large locusts’ swarms observed from Somalia and Ethiopia with further spread inside Kenya.

Since the current control capacity is limited, some of the swarms could move further Western into Turkana County, probably by Mid-January 2020, with likely potential and risk that some swarms could spill over into the North Eastern region of Uganda, particularly Karamoja region (borders Turkana County).

Uganda is a member of the Desert Locust Control Organization for Eastern Africa (DLCO EA) and is currently closely working and sharing information on the current status of the desert Locust in the Region.
A technical team of 2 (Two) officers have been assigned to travel to Kenya (Wajir and Marsabit counties) to understudy the current Locust control operations to subsequently share experiences and support the control efforts in Uganda (in case of any outbreak).

Bagiire however, says  the country should not to panic because there is  vigilance following up developments and control efforts in Kenya. In case of any outbreak, we are ready to handle it.

What has caused these locusts?

The second half of the year 2019 recorded unusually high rains in most parts of Eastern Africa that had not been seen in many years. These rains incidentally fell also in the semi-arid traditional Desert Locusts (Schistocerca gregaria) breeding ecological areas of Sudan, Ethiopia, Eritrea and Somalia. The favourable conditions facilitated further locusts breeding, multiplication and spread in to Kenya.

Desert Locust (Schistocerca gregaria) is a species of short- horned grasshopper family. It is characterized by its nature of high mobility (migratory) and broad spectrum feeding habits. 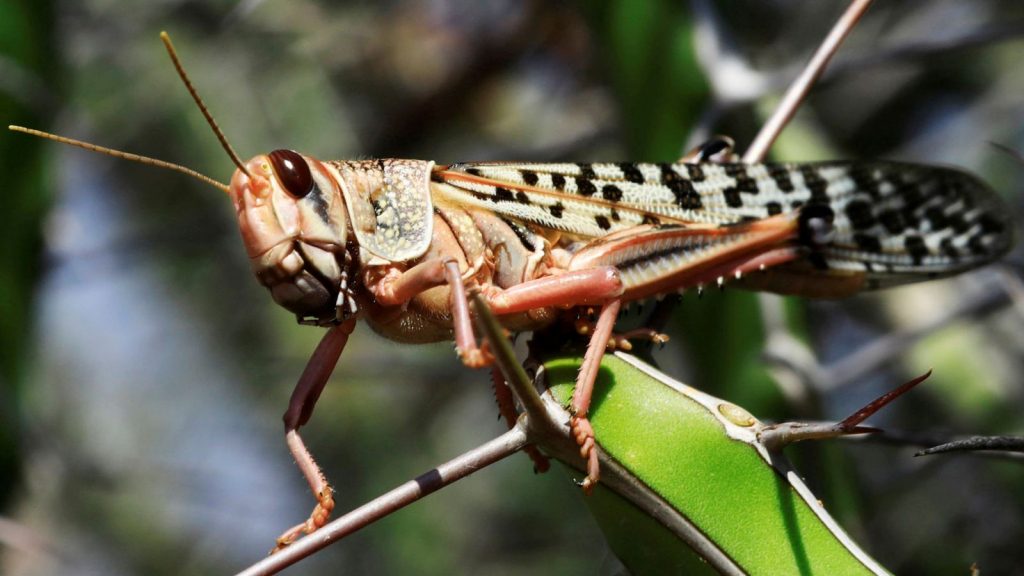 Desert locusts could move into Uganda and South Sudan

Locusts have ability to alter their behavior, colour, size and shape. When the population density is low, locusts behave as individuals, when the population is high, they swarm and migrate. The locust life cycle comprises three stages of egg, hopper and adult and it lives a total of 3 to 6 months.

“In Solitary phase, the Desert Locust lives individual life until it rains with availability of vegetation, the females lay eggs. Desert Locusts usually fly with the wind and swarms can travel between 5-150 km or more a day depending on weather conditions and normally taking off 2-3 hrs after sunrise in warm weather and 4-6 hrs in cool weather.
1.1.3 Locust feeding habits,” Bagiire explains.

Locust swarms vary from less than one km2 to several hundred km2. There can be at least 40 to 80 million locusts in each km2 of swarm. Coupled with its amazing ability to build up and multiply to colossal numbers, a locust can eat its own weight in fresh food (about 2 gm/day). Half million locusts weigh about 1 ton and they can eat about 1 ton of food enough to feed 2500 people. 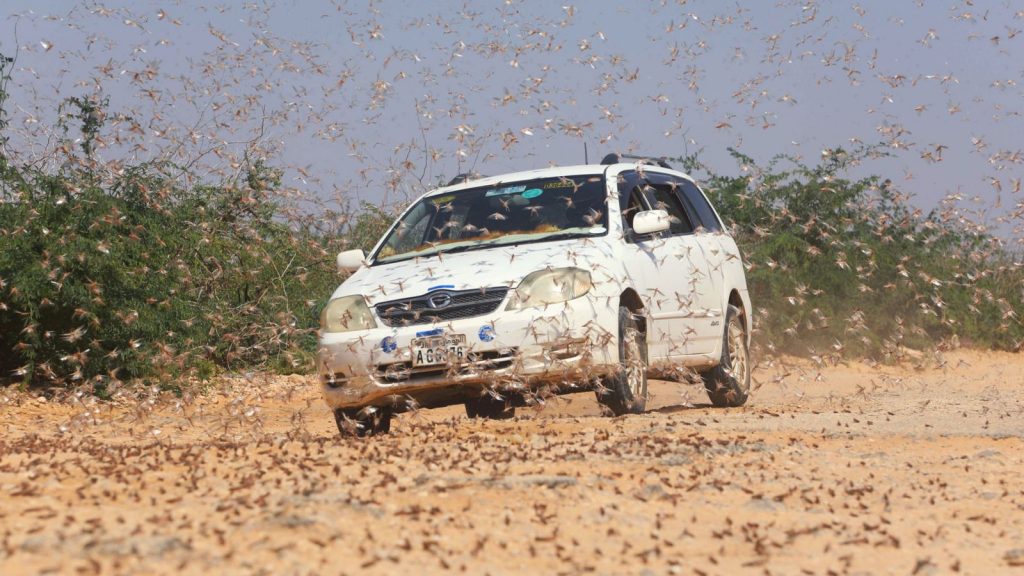 A motorist passes through a swarm of locusts in Kenya

An Ethiopian Airline B737-700 (ET-ALN) encountered a grasshopper swarm on approach to Dire Dawa Airport (HACR).The pilots discountinued the approach and the ET363 instead diverted safely to Addis Ababa. 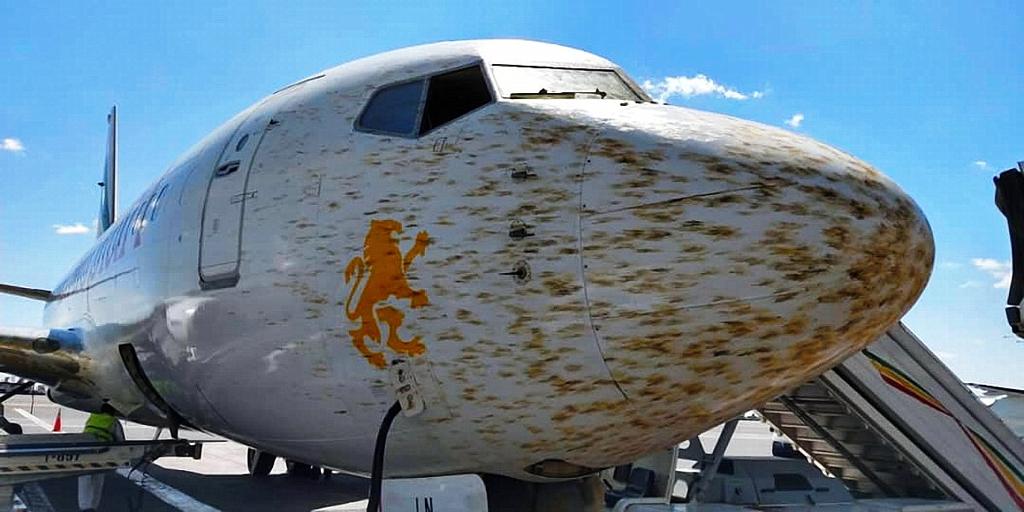 Swarms of the insects have spread from Ethiopia and Somalia and are threatening food production and grazing land, said Kenya’s agriculture minister, Mwangi Kiunjuri.

The UN’s Food and Agriculture Organisation (FAO) said last month that the species of grasshopper had already destroyed more than 175,000 acres of farmland in Somalia and Ethiopia, posing the worst threat for seven decades.        Because much of Somalia is engulfed in conflict, spraying pesticides from the air has become impossible, the agency added.
There is a risk that the swarms could move into Kenya’s neighbours Uganda and South Sudan, the FAO said.

The locusts crossed into Kenya a few days after Christmas and have spread to the counties of Garissa, Isiolo and Samburu to the south and west, Mr Kiunjuri said.

“We recognise that the pest invasion, and the potential to spread rapidly to other counties poses an unprecedented threat to food security and livelihood in the country,” he commented.
The FAO said that while locusts are expected to breed in Somalia this month, there is less chance of that happening in Kenya.

But what are the possible benefits of locusts

According to a 2015  study of researchers on insects, desert locusts could boost food security and offer protection against chronic diseases.

In the study published in PLOS One , researchers based in Kenya and the United States assessed whether locusts contain high levels of chemicals known as phytosterols that could control heart-related diseases.

The WHO says non-communicable diseases such as heart attacks, stroke, cancers, diabetes and asthma kill about 28 million people a year in low- and middle-income countries, including those in Sub-Saharan Africa.

Baldwyn Torto, a scientist with the International Centre of Insect Physiology and Ecology (icipe) in Kenya, who led the study, says that phytosterols block the absorption of cholesterol, a chemical which increases one’s risk of getting heart and other cardiovascular diseases.

“They are also rich in proteins, fatty acids and minerals that boost immunity, fight cancer and prevent inflammation of body organs.”

He adds: “They are also rich in proteins, fatty acids and minerals that boost immunity, fight cancer and prevent inflammation of body organs.”

Kibarah notes that many Africans are now dealing with ailments such as hypertension and cancers due to sedentary lifestyles and bad dietary habits.

“Instead of consuming fast foods all the time, we should eat quality food with nutrients that help us to ward off deadly diseases,” Kibarah says. “People should also exercise to keep fit.”

According to the researchers, although plants are generally the richest sources of phytosterols, insects such as locusts that feed on them can provide alternative sources for these nutrient-rich compounds to humans.

The study found that after 200-250 desert locusts —  Schistocerca gregaria — reared in icipe were fed on wheat seedlings and wheat bran, they consumed the phytosterols from these plants and amplified them, thus resulting in the insects having higher amounts of phytosterols compared to the wheat.

Locusts can also be used as animal feeds as the contain a lot of proteins that are valuable especially to birds.